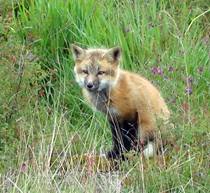 A red fox begging on the roadside has become a traffic hazard on Cattle Point Road just inside American Camp’s northwestern boundary, as visitors are stopping in the road to observe, photograph or feed the animal, according to Lee Taylor, superintendent of San Juan Island National Historical Park.

"The fox has definitely created a safety issue at American Camp," Taylor said. "We're urging motorists not to stop, as the location is just beyond the park visitor center entrance road and on a nearly blind curve. That means everyone must use extreme caution."

Ordinarily the park would move the fox to safer location, but two kits were spotted nearby, which indicates a den, Taylor said. "That means the fox must remain and the burden of safety falls upon us humans."

While they can be a delight to watch, red foxes on San Juan Island have learned that humans often mean a free meal. Unfortunately, a fed fox may condemn it to be a dead fox. The feeding of any wildlife on National Park lands is illegal and dangerous to humans as well as the animals, Taylor pointed out.

"Eventually fed foxes come to rely solely on the food handouts they receive and come winter, when all the food-bearing tourists have left, those foxes starve to death," Taylor said. "They are also more likely to be run over by a motorist because they frequent roads and parking areas."

Weighing about 10 to 14 pounds, red foxes are members of the dog family Canidae, and look similar to dogs, wolves, and coyotes. They have long, pointed snouts and erect ears, and are often seen because they prefer open habitats and are not strictly nocturnal.

Because the red fox can be orange, silver, black, or any combinations thereof, look for its distinguishing mark: a bushy, white-tipped tail. They also commonly have black "stockings," white undersides, and ears that may be tipped in black outside with white inside. They look bigger than they really are because of their thick, bushy coat, and even then can look rangy with tall, skinny legs.

While they are opportunistic, omnivorous feeders and will eat insects, birds, mice, snakes, rabbits, nuts, berries, and fruits, one of their favorite local foods seems to be the Townsend's vole. Watch as they creep low to the ground after their prey like a cat, stretch their head high to listen and look, then pounce with their forefeet.