The park is using a portion of the funds to pilot a new program in partnership with the library through which park rangers and library staff and volunteers provide outreach to Spanish-speaking audiences on the island.

The first program kicked off Thursday, September 5 and will continue to be offered in conjunction with the library’s English as a Second Language (ESL) program from 6:30 to 7: 15 p.m. on Thursday evenings through October 3.

Themes vary each week and include: an overview of America’s National Parks, the basics about why San Juan Island National Historical Park was created and how it preserves, unimpaired, cultural and natural features for future generations; the park’s cultural history from the first peoples to the joint military occupation and beyond; and the plants and animals in the park. As a finale, on the final evening each child will complete a Junior Ranger activity book and be awarded a badge and a patch.

“One of the great things about our national parks is that every American can relate to these treasured places if given the chance to experience them,” said Jonathan B. Jarvis, Director of the National Park Service. “It’s our mission to engage visitors from all backgrounds in the diverse stories that we tell in our national parks. Thanks to the support of the National Park Foundation, we can propel that outreach, and engage new audiences that would otherwise never have the opportunity to experience a national park."

"The America’s Best Idea program gives people – particularly youth – incredible opportunities to connect to our national parks through unique and innovative ways,” said Neil Mulholland, President and CEO of the National Park Foundation. “From experiences that center on history, the environment and even adventure, we are able to capture the imagination of a new generation of park-goers in ways that benefit their lives and the future of the parks." 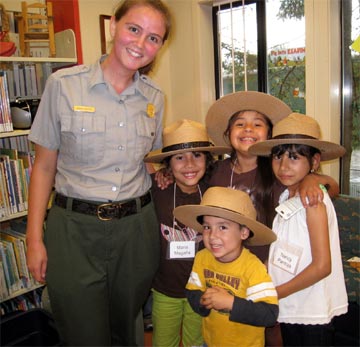 More in this category: « Herbicide to be used to benefit rare butterfly 30 Day Comment Period Open for New Park Compendium »