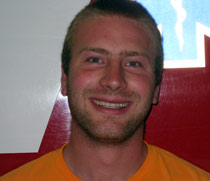 Brandon Baney has been part of San Juan Island EMS since the fall of 2013 and a Nationally Registered EMT since May of 2014. Baney also volunteers for the fire department. He finished his Fire Fighter 2 certification in 2013 and also responds as a wildland firefighter.

Baney says, “I love the excitement of EMS and the satisfaction of leaving a call with a good feeling I made someone’s bad day better.”

He has worked as a foreman for Mike Carlson Enterprises since 2005. You may have seen him running the show on the Blair Street project.

He looks forward to graduating from the University of Phoenix, Online School of Business in 2017.

He juggles all this while also being a father of two children.

More in this category: « FH APS Volunteers of the Month: Dave and Nancy Harvey Lopez Island student nominated to Naval Academy by Larsen »