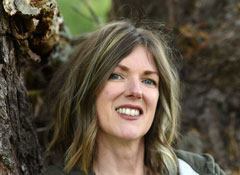 Jennifer Boyden’s award-winning, debut novel, The Chief of Rally Tree, will be released on November 13. The public is invited to a celebration and reading from 6 to 9 p.m. Tuesday, November 13 at Brickworks in Friday Harbor. The author will read from her work starting at 7 pm. The Chief of Rally Tree was awarded the Siskiyou Prize for New Environmental Literature and is being published by Skyhorse Publishing.

The novel follows Roal Bowman’s attempt to locate his wife after she joins Winter Patent, a man who believes he can save save forests by accessing the consciousness of trees. No one knows if Winter, who spent a decade living with wolves, is sane or not. They do agree he’s dangerous—and that Roal is out of his league. When Roal stumbles across his wife’s secret life, he realizes he no longer knows the woman he is searching for.

Boyden’s work is often noted for its dark humor and innovative language.

Author Ann Pancake, Judge for the Siskiyou Prize, writes of Boyden’s novel, “Inventive, smart, and often hilariously funny, The Chief of Rally Tree delivers a social critique both searing and sly.” The novel has been called The Hidden Life of Trees meets Gone Girl.

Internationally acclaimed writer Lidia Yuknavitch states, “The Chief of Rally Tree wrestles the knot between contemporary identity questions and how the heart longs for authentic meaning in a world made of fictions...I devoured this book and dreamt of a vegetal realm where being and love might yet matter.”

Boyden states the novel’s genesis “is the result of fascination with, among other things: the inner lives of organisms that do not inhabit time the way we do; brain science; survivalism, estrangement; the physical wellbeing of the earth; and the brain’s alarming ability to convince the self that everything is just as it should be.”

The novel has been hailed as “THE book for this moment in our lives, in our history,” by reviewer and writer Nance Van Winckel.

In addition to her novel, Boyden is also the author of two books of poetry, The Declarable Future, which won The Four Lakes Prize in Poetry and The Mouths of Grazing Things, winner of The Brittingham Prize in Poetry (both with University of Wisconsin Press).

Prior, she was a PEN Northwest Wilderness Writing Resident, a residency which invites one writer to live in unparalleled seclusion for a year in a remote region on the Rogue River in southern Oregon. Her work can be found in numerous journals and anthologies.

Boyden invites the community to her book launch at Brickworks on November 13. She notes, “I love living in a community where people show up for their authors and celebrate literature and the arts. I believe that what we gather to is a powerful statement of what we believe in, and I can’t wait to celebrate this novel with our community!”

Light food will be served.