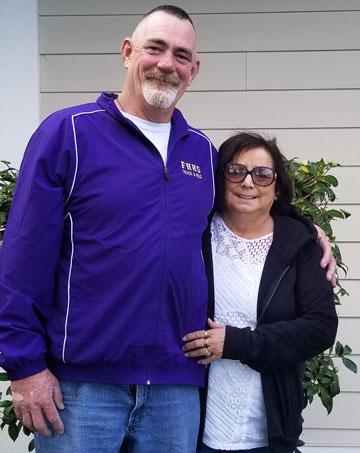 Throughout his life, Shannon Plummer has ended up in places he didn't expect.

A "soldier's soldier" he planned to make the military his career. He was on an E7 list, when his military career was cut short by an injury to his leg. He ended up with gangrene and half his calf muscle was surgically removed.

The surgeon, who had been a MASH doctor, told Shannon he'd seen worse. It wasn't until years later, Dr. Doughtery admitted Shannon's leg injury was the worst he'd seen. The doctor was instructed to amputate the leg, instead he performed four operations including one in his office to avoid detection. Shannon was told his chances of walking again were 10 percent. It took him eight years to be able to walk without a cane. He ended up with an honorable discharge from the Army. While at the Presidio processing out, he realized Dr. Doughtery was there working on his PhD. The Major burst into tears when Shannon walked into his office.

After his discharge, he was delivering milk in Los Angeles when the Rodney King riot broke out around him. He went home and told his wife Toni it was time to pull up stakes. They headed north planning to work in Alaska with an ex-army mate. Enroute they took a break at NAS Whidbey where someone recommended they make a side trip to Lopez Island.

Shannon had $60. He told Toni he'd take $20 to the casino and if he tripled it they would take the ferry to the islands. He walked in the casino, straight to the roulette wheel, placed his bet, tripled his money and walked out ready for Lopez.

When they arrived at the ferry terminal they had just missed the boat to Lopez. The terminal worker told them Friday Harbor was where they should go.

So, thirty years ago, they walked onto the ferry and disembarked into a much brighter future on San Juan Island. While the couple had battled their way through hard times, life was about to give them a break. They met Robin and her husband who ran the Seafood stand on the docks at Friday Harbor marina. They said, "If you can make it a year here, you'll make it."

The couple met Peter deLorenzi at the American Legion. Shannon was wearing a Harley hat. Peter, on a ladder, said, "Hey do you actually ride or do you just like to sport the material?" Shannon offered to knock down the ladder. Peter offered him a drink instead.

The couple sat down and talked with Peter.  He offered them housing at the large log home on Eagle Point which Peter took care of while the owner's family was in Florida. In exchange for the free housing, Shannon worked on the plumbing. Toni started work at Friday Harbor Elementary School. Over the years, Shannon worked for Papa John's, Inns and Suites and ended up working for the school district where he also coaches Wolverine football and track. He was the American Legion Post 163 Commander for eight years.  Toni is still with Friday Harbor Elementary School. 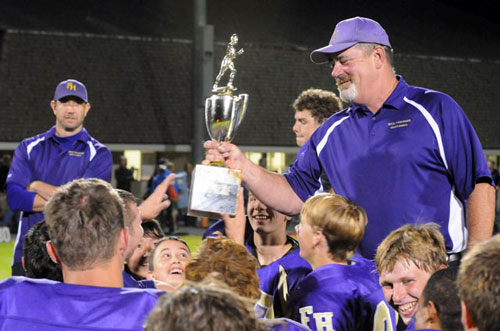 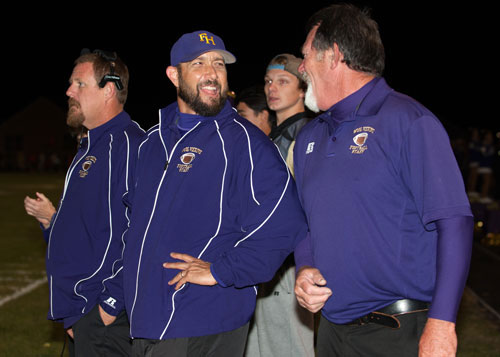 Right now, the end of March 2019, Shannon is at a place he definitely expected to be - in Hawaii with his wife and 23 relatives. His 70-year-old sister Lorna challenged her 60-year-old  brother to take part in the Lava Man Iron Man in Hawaii which includes a 1.1 mile open water swim, followed by a 26.5 bike ride, and finishing with 6.6 mile run. Lorna has participated five times.  For the past year Shannon has been dieting and training. He went from 300 pounds to 229 pounds. Following the weight loss, he started an 120-day training program beginning with using a stationery bicycle indoors for 30 days. His friends provided the bicycle.

Shannon has trained by swimming at Egg Lake. He's looking forward to the buoyancy of salt water at the actual race.

Several of Shannon's nieces and nephews are also participating. Shannon has six siblings and at 6'4" is the second shortest brother. His nephews also inherited the family's tall genes. One of Lorna's sons, Curt is 6'11".

Vern Howard gave Shannon several San Juan Brewing t-shirts. He plans to get a photo of the guys wearing the shirts. Shannon said, "It'll be the size of a billboard."

So if all goes as expected, Shannon will be crossing the finish line at the Lava Man Iron Man on March 31, 2019.

More in this category: « Ricky Hughes served as a page in the state House of Representatives Winning haiku written by an islander for second year in a row »