He did it. Shannon Plummer is now an Iron Man. He finished the Lava Man Waikoloa Triathlon in 4:59:48 on Sunday, March 31. The 60-year-old Friday Harbor man was in Hawaii with his wife, Toni,  and 23 relatives including his 70-year-old sister Lorna. This year was the fifth time she has competed in this triathlon. She challenged Plummer a year ago. 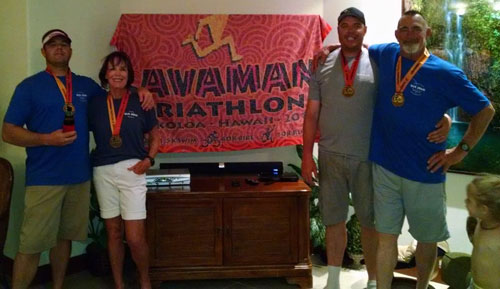 Shannon (right) with his sister Lorna and two nephews.

You can read about his journey to the triathlon  here.

Photos of Plummer can be viewed on the Lava Man Triathlon website.

A PDF of all the events is posted here.

Shannon and Toni will be returning to Friday Harbor Thursday, April 4. They have a 6 p.m. ferry reservation.

More in this category: « FHHS Band wins 3 Superior ratings He left us a legacy of the Vietnam War »