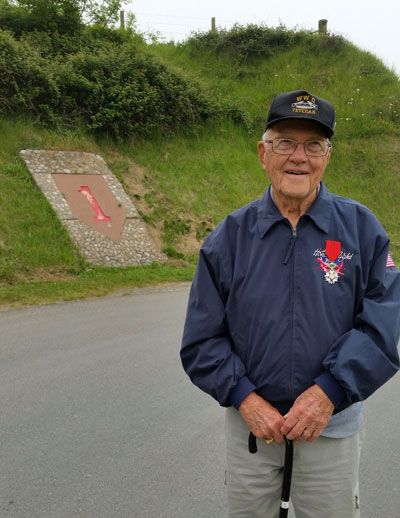 Cheryl Hancock of San Juan Island and her 97-year-old father Bert Chandler are traveling to Normandy to attend events honoring the 75th anniversary of D-Day.  Chandler, one of the last remaining American D-Day heroes,  will be honored at several events. He was in the first wave of boats to hit Omaha Beach on June 6, 1944.

He was in the Army, 1st Division AKA the "Big Red One", 16th Regiment.  He was one of the last survivors who actually came ashore on D-Day. He proceeded to fight through France and was wounded in the Battle of the Bulge. He was awarded the Purple Heart along with other medals for his service. In 2016 he also received the French Legion of Honor.

The father and daughter will return to Friday Harbor on  June 11 and stay through Father’s Day.

More in this category: « Feel like feuding at the Fair? Troop 4090 has it all: Eagle Scouts and an adventure ahead »