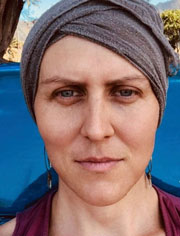 Be Scofield (pictured left), an investigative journalist, spent a month in the San Juan Islands in November 2018 interviewing people about the 2006 death of 52-year-old Orcas Island resident, Carla Jean Shaffer. The resulting article, "Aaravindha Himadra and the Mysterious Orcas Island Death of Carla Jean Shaffer," was published in The Guru online magazine. A lawsuit claiming defamation and asking for damages and the removal of the article from the internet has been has been filed in San Juan County Superior Court for plaintiffs Anis Pederis Briedis, Jil Lisa Peterson-Briedis and Sambodha, Inc.

The preface to the January 24, 2019 article: "At 1:30 pm on January 5th, 2006, Carla Jean Shaffer’s body was found dead, floating in a small pond near the Orcas Island airport in Eastsound, Washington. She was 52 years old. Three weeks before, on December 14th, Carla suffered 30–40 stab wounds, a broken rib, a punctured liver, a damaged breastbone and had received a blunt force strike to her face, smashing in several teeth. Thirteen years later there is still no definitive conclusion about how she died. Officially ruled an accidental drowning, and self-inflicted stabbing, many people, including Carla’s family and friends, have never accepted this version of events. For the first time ever, the story of this unsolved mystery is being told."

COPY OF THE LAWSUIT:  PDF.

ARTICLE about the lawsuit:

ARTICLE about the reporter:

SLAPP is the acronmyn for Strategic Lawsuit Against Public Participation.

According to Wikipedia: A strategic lawsuit against public participation is a lawsuit that is intended to censor, intimidate, and silence critics by burdening them with the cost of a legal defense until they abandon their criticism or opposition.

DEFAMATION:   is a statement that injures a third party's reputation. The tort of defamation includes both libel (written statements) and slander (spoken statements). (from WEX legal dictionary)

EDITOR's NOTE: I have turned off comments for this article as they were getting out of hand. {jcomments off}

If you want to express your opinion,  please send a letter to the editor (editor@sanjuanislander.com) including your name. Also include a phone number which will not be posted but may be called by me for verification.  - Sharon