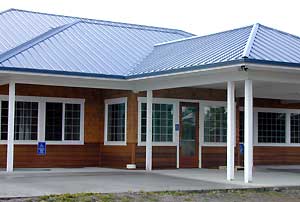 Citing "credible threats of violence", Steve Schubert, the acting chair of the Mullis  Center operating committee, said the committee decided to reinstitute the Pledge of Allegiance. He led the recitation of the Pledge this morning, Friday, July 5, 2019 at the senior center in Friday Harbor.

Reciting the Pledge and saying grace had been dropped in March after the committee decided to try to be more inclusive. "The Pledge served as a marker between the older and younger seniors," Schubert said. "Young seniors are less interested in symbols of patriotism than lunch. The Pledge was intrusive and created an Us vs Them situation."

The abrupt change was met with strong objections by many of the seniors. A petition, was signed by 50 seniors in the lunch room before organizers were told petitions weren't allowed in the room. Another petition with 200 signatures was presented to Rita Weisbrod, the Chair of the Operating Committee.

Sue Carnes was escorted from the building by a San Juan County Sheriff's deputy after she arrived with a flag and led the pledge at one of the lunches. She was issued a trespass warning and banned from the building. Minnie Knych says she was  banned after she handed out stickers that said "I Stand for the Pledge" to those who asked for one. A few others also received trespass warnings which mean they will be arrested if they go into the senior center.

A camera crew from King 5 TV was at the center on Friday, July 5 after being called by Knych. The crew recorded the pledge plus a shouting match which preceded the pledge. The story is expected to be on the news Friday evening. 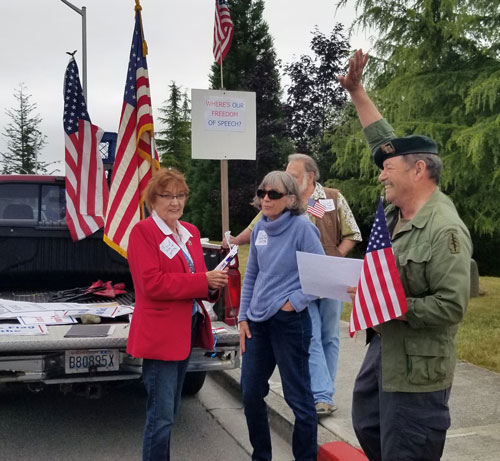 Minnie Knych, in red, with fellow protesters on Nash Street in Friday Harbor in front of the Mullis Center. Sharon Kivisto photo

Groups of protesters were at both ends of the center's driveway which opens onto Nash Street on Friday. They didn't know that the executive committee had made the decision to reinstate the Pledge on July 3.

The protesters believe the change was made on Friday and was a result of the television cameras presence.

In an interview Friday, Schubert said he is responsible for the decision. The committee was in the process of setting up dates for meetings to reconsider the Pledge when Weisbrod resigned because of negative emails that affected her health.

When the credible threats of violence and explicit warnings were received, Schubert decided safety was paramount. He wouldn't give details about the threats but did say they included phone calls and emails. The committee was told people from off-island were planning to come.

Asked what's next, Schubert said. "We're prepared for anything. I'll deal with it."

More in this category: « San Juan Island Lions fund aluminum photo boards at Jacksons Beach Debbie Lawson has a home of her own in Friday Harbor »