Work is progressing on the baseball field at the John O. Linde Community Park. With the San Juan Island Community Foundation serving as the fund steward, Mike Carlson Enterprises broke ground in late June and will complete the baseball field, walking path and general use areas. The work is expected to be done by Halloween, though the grass in the newly-developed field will need about 18 months before it is ready for play. Opening day could be in Spring 2021, according to San Juan Island School District which owns the land. 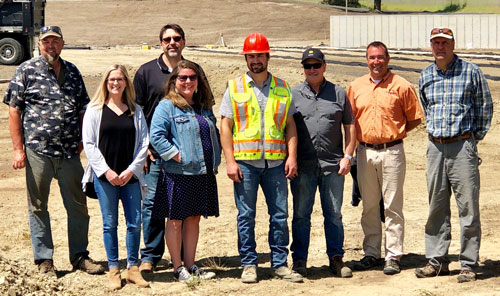 The John O. Linde Community Park was first dedicated in September 2017. The site is  maintained by Island Rec. Open to the public year-round, existing amenities include a playground, soccer field, fsoftball fields, multipurpose field and a partial walking path. The park is used by visitors and San Juan Islanders of all ages, including Friday Harbor High School teams.

After an anonymous donor provided the funding to complete the baseball field, an oversight committee was formed to actively monitor the progress of the contracted work to ensure the project will be completed on time and on budget. Committee members include representatives from the SJI Community Foundation, Island Rec, the SJI School District and engineer Don Campbell from Robert W. Droll Landscape Architect, PS.

Carrie Unpingco, Executive Director of the SJI Community Foundation said, “We’re so happy to be finally finishing this project and look forward to having a baseball field available for regulation play. Along with the existing fields and playground, the walking path and common area is yet another beautiful outdoor resource for families and visitors in our community.”

Founded in 1994, the SJI Community Foundation is dedicated to improving and enriching the quality of life on San Juan Island by encouraging philanthropy, growing an endowment for purposeful grants to community charitable organizations, and building partnerships that effectively connect donors with island nonprofit organizations and their projects.