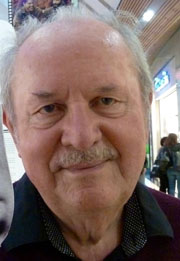 Friday Harbor Film Festival is seeking entries into the 2019 competition for the László Pal Emerging Filmmaker Award. Recognizing young talent in filmmaking, it will be presented to the creator of the best student short film during the Festival to be held October 25-27, 2019. All student films will be screened by a panel of film industry judges to determine the winner.

Student filmmakers 13 - 26 years of age can submit their entries through Film Freeway at https://filmfreeway.com/pages/how-it-works. Either sign in for a new account or login, if you have an existing account. Type in “Friday Harbor Film Festival” and click the “Submit Now” button.

Friday Harbor Film Festival is delighted to honor filmmaker László Pal, who lived on San Juan Island prior to his death and served on the Film Festival’s board for three years. As an Emmy Award winning director, cinematographer, writer, editor, and producer, László Pal created films in many places around the world, while also educating young filmmakers at the University of Washington.

László's life tells a tale of immigration and the courage of a political refugee running from Communism. László's award exemplifies something very good about this country, and about his profession: We embrace immigrants, and hard work is rewarded with good lives. László's accomplishments in America are a rebuke to those who would now close our borders out of fear and prejudice. Think of what Hungary lost when the young László was driven into exile.

The judges for the 2019 László Pal Emerging Filmmaker Award include Richard Chew, film editor, producer, and cinematographer, best known for his Academy Award-winning work on Star Wars (1977); Maria Garcia, a New York City-based film critic, author, and teacher; and Phil Borges, award-winning social documentary photographer and filmmaker. Partho Gupte won the award in 2018 for his film, Jasmine Stung. He has since received numerous other awards, including the Emerging Storytellers Grant and a one-on-one mentorship with Jurassic World director Colin Trevorrow.

Please help us continue this valuable program by buying a FHFF Patron Pass. For $526 (including a tax-deductible $300 donation and $26 processing fee), receive a VIP pass to the 2019 FHFF, including access to all special events and a guaranteed seat for any screening, up to 10 minutes before showtime.

More in this category: « Progress on baseball field at Linde Community Park Waiting for a hood from Texas; Mi Casita plans to reopen ASAP »