Filmmaker and environmental activist, Peter Jay Brown, who is currently living and working on his boat in Friday Harbor, is putting his passion and his expertise to work on behalf of the critically endangered Southern Resident orcas. Peter was born and raised in Eastham MA, Martha’s Vineyard, where the sea shaped his passion and his future. 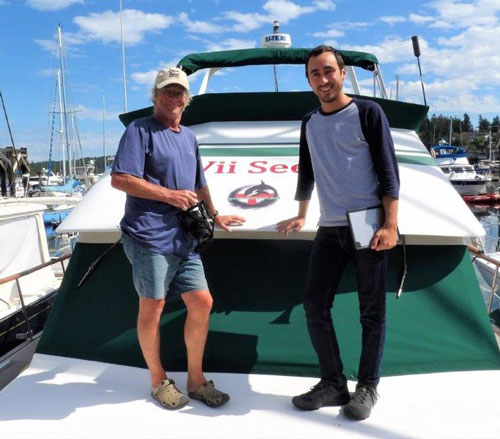 Peter James and Christian Triana on the Wii Seeks

“It was before the big tourist invasion,” he says. (Those who have lived here for a while will get the moment of irony: “Let’s not become another Martha’s Vineyard,” was a common refrain on the island.) “My parents ran the grocery store and I grew up in the wilderness of the Cape Cod National Seashore. We had boats before we had bicycles.”

We are sitting on Peter’s boat, the Wii Seeks, surrounded by film equipment and cellphones, all representative of his current project, N.O.W. (Neighborhood Orca Watch), that enables anyone with a cell phone to record their viewing experience, including boat interactions and harassment, and then upload it online in real time. N.O.W.will be setting up shore-based cameras in known areas of orca habitat. Peter, and project manager, Christian Triana, will be demonstrating their project at the Orca Relief Citizens’ Alliance booth at the County Fair.

Christian, who attended the University of California Santa Cruz, studied Ecology and Evolutionary Biology with a focus on chemistry, ecology, and environmental toxicology. The most recent project he worked on involved lead analysis of golden eagle and California condor feathers. Through feather analysis, it is possible to measure the magnitude and frequency of lead exposure during the timeframe of feather growth. The analysis of feathers has shown that condors are exposed to lead more frequently than what was previously shown through blood analysis. And condors are poisoned by the lead from bullets when they feed on the carcasses of animals shot by lead-based ammunition.

Christian was recommended by his UC Santa Cruz advisor, Myra Finkelstein, who spent time on Sea Shepherd (where she met Peter Brown) before focusing on her research as an environmental toxicologist. https://www.sierraclub.org/sierra/how-toxicologist-saving-california-condor-science

Christian’s first encounter with an orca whale was at Sea World. He was eight years old. Now his passion is to save them from extinction. Irony prevails.

Peter’s experiences as both a filmmaker and environmentalist are extensive. His film, Confessions of an Eco-Terrorist, is a riveting experience about the perils and triumphs of Sea Shepherd and Captain Paul Watson and his crew. Peter had more than 30 years of experience on Sea Shepherd, resulting in a film that is as informative as it is exciting.  Facebook page

His follow-up film, Confessions of an Eco-Terrorist—Battle for the Planet opens in October.

His 40-year career in film and television ranges from Entertainment Tonight to the Discovery channel for which he created feature films about Indigenous cultures around the world, including throughout Africa. And through his passion for skiing, Peter ended up working for ABC sports as a filmmaker at the winter Olympics. His professional filmmaking experience ranges far and wide, geographically, culturally and politically. His most current activity involves working with the Gitsxan First Nation in northern British Columbia where he helped them establish a television station so they could livestream their meetings.

This live streaming is precisely what Peter and Christian are working towards with the N.O.W. project. It will enable the general public to do present-time video sharing of their orca whale experience—good, bad & in-between. It is a “see it for yourself” project that can both help the orcas get the protection they need as well as share the extraordinary gifts of the natural world.

Christian saw the orcas in the wild on his first ferry ride to Friday Harbor. He is also seeing a lot of local SRKW politics-at-large for the first time.

“Everyone is blaming someone else for their disappearance,” he said. “There are whale-centric symbols everywhere in town yet there’s so much politics and interpersonal conflicts behind everything. I didn’t learn about these hurdles to species recovery in school.” He is excited about the ability to “document reality” that this project with Peter entails. “I love the whales. I love the natural world. I love making a difference.”

Peter’s commitment to preserving the natural world reflects his many decades of experience—as both a father and a filmmaker.

“I would be negligent if I didn’t give it my all,” he said. “The respect of my kids is important to me.”

To him, the SRKW situation was a surprise. “I thought the orcas were taken care of,” he said. “I had no idea they were in such trouble.” www.peterjaybrown.com

The N.O.W. project is seeking help from people of all skill sets and backgrounds. They can be reached at: watchorcas@gmail.com to see how to get involved. Their website is www.neighborhoodorcawatch.com