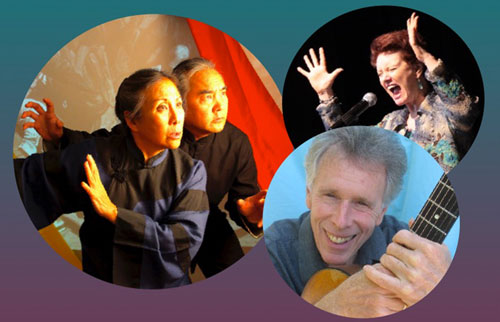 The 8th Orcas StoryFest, which begins August 23, will culminate in a concert at the Orcas Center the evening of August 24.

After the island feasts on stories of wisdom and wit, on spirit and wisdom, and family stories, islanders Nancy Wang and Robert Kikuchi-Yngojo of Eth-Noh-Tec will bring their newest piece Shadows & Secrets to the Orcas Center, in addition to their guest featured artists Susan O’Halloran, national storyteller from Evanston, Illinois, and Gary Lapow, singer/songwriter from Berkeley, California.

Shadows & Secrets, a staged multi-media reading, will entice your love of mysteries as Nancy attempts to solve the mysterious death of her grandfather, coined ‘the wealthiest Chinaman in the country’ by newspapers.

A genius at entrepreneurship, he started and managed three of the most successful high-class Chinese restaurants in Chicago, Illinois in the early 1900s that catered to the carriage trade – upper class European Americans. But, as we know, all that shines bright is not always as shiny as it seems. Some people are not particularly happy about another’s success.

The Chinese tong wars, the equivalent of the Italian mafia, were raging and murders were common enough to involve the city police daring to involve themselves in the tong wars. But Chicago was known for corruption amongst politicians and the police force.

So, where did Nancy’s grandfather fit into this complex socio-political fabric? Just how did this Chinese immigrant who defied the color barriers of the early Twentieth Century die at age 43 in his own restaurant the night before his family was moving to China? Come help solve the mystery!

Susan O’Halloran, an Irish American, will tell several stories of racial justice, shining the light upon our shadow side and the best of who we are. Susan is a vibrant storyteller, deep and sensitive, funny and endearing, and presents diversity workshops around the world.

Gary Lapow, a Jewish American, is a singer/songwriter whose humor and sense of our human history, plight and light, will delight audiences, just as he does in the Bay Area where he is a household name amongst Bay Area families.

And of course, there is Robert and Nancy of Eth-Noh-Tec, whose international tours of their unique storytelling style as tandem tellers, will close the evening with a shadow side, but humorous Chinese ghost tale!

All Featured Tellers for StoryFest -

7:30 pm Orcas Center: Shadows, Secrets and other stories and songs;

More in this category: « Luz, an evening of Flamenco Feb 27 in Friday Harbor and Feb. 28 on Orcas Island Meet Your Volunteer Firefighter: Erin Graham »