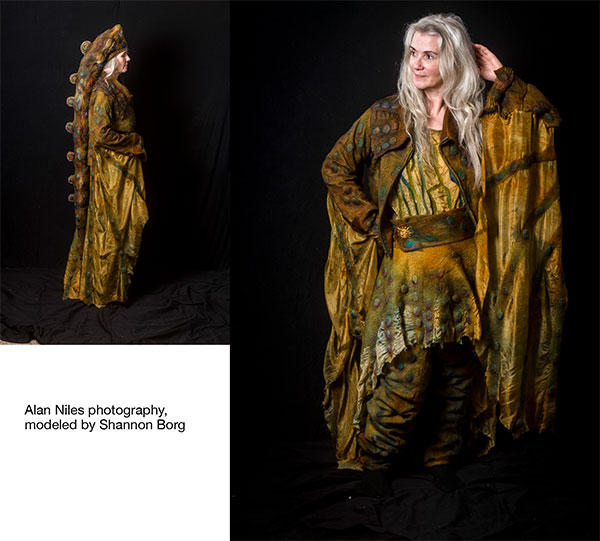 Friday Harbor artist, Patti Barker has won two different awards this year with wearable art designed for the runway. She has been creating wearable art for nearly a decade, but it was learning about the WOW challenge that inspired the creation of Dragon Skin. It’s a five-piece ensemble, created using hand-painted silks, merino wool and nuno felt techniques.

Dragon Skin made its debut at the Port Townsend Wearable Art Show on Mother’s Day weekend this year. It was modeled by dancer, Emri Kilham on the runway, who twirled and presented the work gracefully. To Barker’s surprise, Dragon Skin won the coveted Peer Award, where participating artists and models vote for their favorite entry. Still on a high from that event, Patti shipped Dragon Skin to Maryland to participate in the ManneqArt wearable art competition where it won First Place, Amphibian Category. 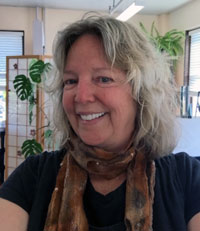 The mission of this work is to promote female empowerment. Its wearer emits the power to slay a dragon and fashion the spoils. Her warrior spirit carries the message, “You’re stronger than you even know.”

Dragon Skin is still on exhibit in Maryland, at the ManneqArt Museum, Historic Savage Mill and will be returning to Friday Harbor in October.

Barker is an award-winning, felt wear designer. All of her designs are produced with felted seams (no sewing). The fabric and garment are created simultaneously using wet-felting techniques. What makes them more unique is that she hand-dyes, spins, cuts most elements used.

Barker earned a BA in studio art from Western Washington University. While at WWU, she participated in a travel abroad program that included a month-long residency in Auvillar, France. After visiting the ancient cave art, she began her study of felted “skins.”

Barker has exhibited in juried art shows since 2010. Her work has been published in Fiber Art Now magazine. She has been teaching felt-making for over eight years and is a member of the San Juan County Textile Guild. For more information, visit www.pattibarker.com