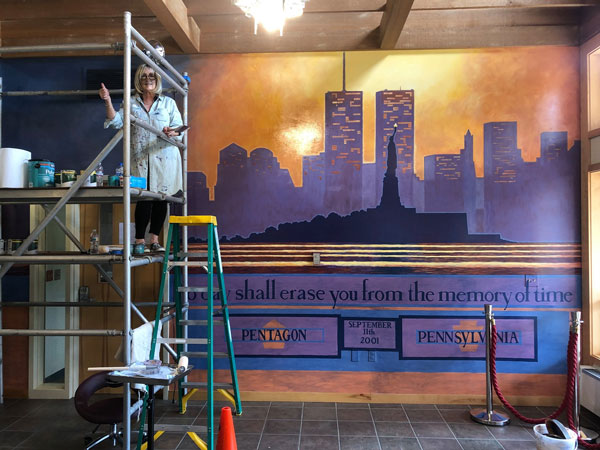 A structural beam from the fallen towers of 9/11 has found its forever home at the Eastsound Fire Station on Orcas Island. Its journey began as many as 50 years ago with the construction of the original World Trade Center in New York City, where it remained steadfast for over thirty years – until tragedy struck. Since that day, it has become a symbol of hope, rising above the ashes and rubble, serving as remembrance of not only those who were lost, but all who rose together in perseverance. 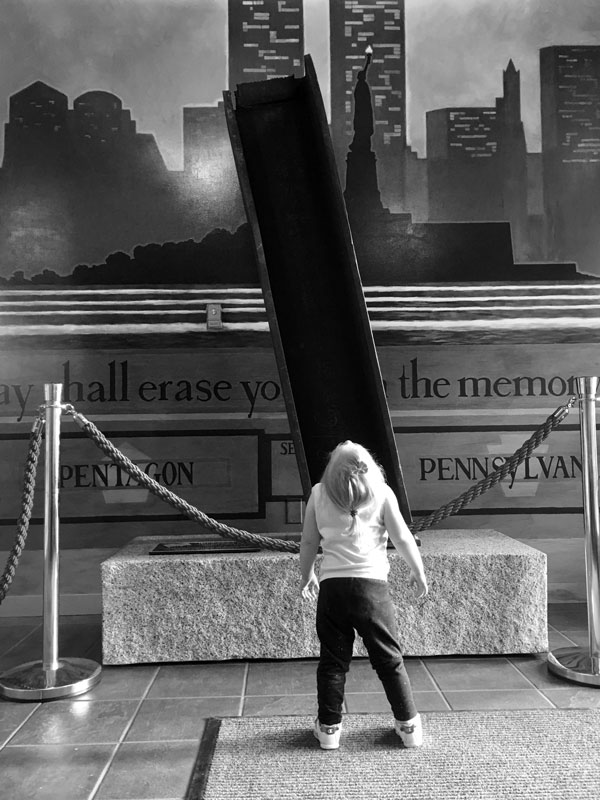 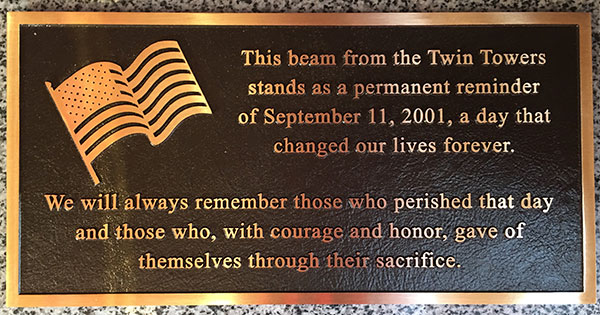 In 2006, the Port Authority of New York and New Jersey (PANYNJ) launched a program for distribution of the debris. Three years later Chief Mike Harris, who served with Orcas Island Fire and Rescue (OIFR) from 2004 – 2012, received a notice from the Washington State Fire Chief’s organization. It read that every fire department across America was eligible to apply for a piece of the structural building. The criteria to obtain a piece of the tower included an application process vetted by the PANYNJ, a commitment to keep the artifact memorialized for public viewing, and finally, an authorization to release the piece – signed by a federal judge.

Like many, Chief Harris remembers those moments of impact well. Many recall where they were, what they were doing, and the feeling of catastrophic disbelief as the day unraveled. With thousands of fellow Americans lost amongst the debris, including 343 fallen firefighter brothers and sisters, Chief Harris set out to apply for the opportunity to honor those who fell, and in 2011, received word that OIFR had been chosen to receive one of the artifacts. Chief Harris was humbled. Eastsound Fire Station would become one of 23 locations in Washington state to receive this honor.

“Orcas Island is about as far as you can get from New York city,” shared Harris. “I only had one firefighter who had roots on the east coast at the time, and that was Ted McKey.”

Ted was onboard, so he grabbed his dog Merry, fired up his diesel truck, and set off on the 2,980-mile trek to JFK airport to retrieve the beam. “It just made sense,” explained McKey, who had a family heirloom to pick up in Cape Cod, “I was just the guy with the tool to make it happen.” And within ten days’ time, Ted, Merry, and a 200-year old grandfather clock accompanied the 750-pound beam home to Orcas Island.

“It was an easy mission for me to accomplish – because I believed in it,” said McKey, “This monument to me isn’t about the unnecessary deaths, it’s about people willing to step up when there’s a need for service – the willingness to serve, that’s what it’s about. You do what needs to be done, no matter how mundane, because it’s part of service.”

Once on the island, it was dedicated at the annual 9/11 ceremony, and sat on display in the foyer at the Eastsound Fire Station, with plans to create a more permanent memorial.

“Ideas for the scope of the memorial kept going through revisions,” remembers Chief Harris. For a piece so profoundly meaningful, it was difficult to decide the best course of action for displaying and honoring the artifact.

For years, Battalion Chief Nick Kiniski has taken a moment at the start of each shift to touch the beam, “It serves as a reminder in what we do – that at any moment, the call goes out.”

“For a long time, the beam was just sitting in the lobby at the station. I don’t think a lot of people knew what it was,” shared OIFR Lieutenant, Alan Stameison, who would often find empty cups littering the surface, “It was treated like a coffee table, and that just didn’t sit right.”

Chief Scott Williams, who has served OIFR as Chief since 2016, reflected, “I’ve always felt a kinship to this piece. We had to do more for it.” With passion in his eyes, and a vision on his heart, he worked with the most recent team of collaborators on completion of the project.

Funding for the memorial comes from the generosity of local donors, including long time Commissioner Barbara Bedell, who resigned in late 2018; the Orcas Island Fire and Rescue Volunteer Association and in-kind donations from a handful of people including various OIFR members through the years.

Serving as the most recent project coordinator, Lieutenant Stameison worked with artist Robin Lassen, who completed countless hours designing the memorial and painting the mural; woodworker Chuck Minerich and son, Jesse, who donated their time to install wood planks on the foyer walls; and George Schermerhorn, an OIFR Firefighter/EMT, who donated his time working alongside sculptor Pete Welty to integrate the pieces of the memorial together. Each artist and craftsman expressed a shared and immeasurable affinity to the project.

The 6-foot beam now stands atop a monumental slab of granite in the foyer at the Eastsound Fire Station, backed by a breathtaking mural of a pre-9/11 New York City skyline – the twin towers standing tall.

OIFR would like to invite the community to attend the 9/11 Memorial Dedication Ceremony at 6 p.m.  Wednesday, September 11, 2019 at the Eastsound Fire Station, to join in the official unveiling of the Memorial. Reception to follow.