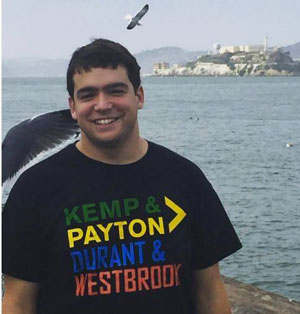 Douglas Archuleta is joining the Island Rec team as the new after-school Program Manager. He will be overseeing the Study Time and Afternoon Recreation (STAR) program at Friday Harbor Elementary School.

After growing up primarily in King and Kitsap Counties, Archuleta went to school at Western Washington University where he graduated with a degree in Community Recreation and a double minor in Journalism and Sport and Exercise Psychology. Nature and outdoor recreation opportunities have always been important to him, and after spending two and a half years in Tacoma post-graduation he is eager to return to a place where he can regularly and actively explore the outdoors.

Archuleta can be found following his passion for baseball in his free time, whether it be through coaching, spectating, or playing. Look for him also being active around the island raising his Golden Retriever, Gus, with his girlfriend. He is excited to help build on to what is already a flourishing community on the island through whatever methods he can.