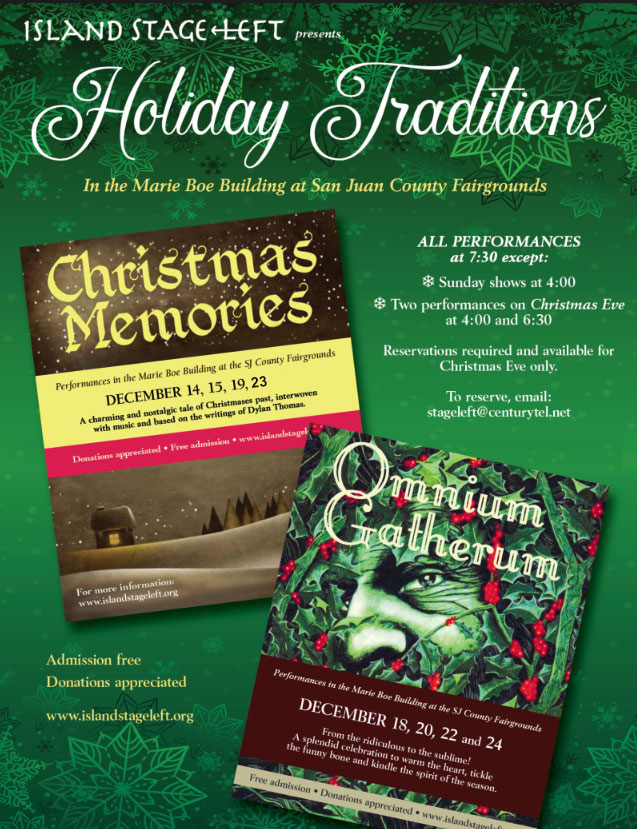 “They’re both such popular shows, we thought since we didn’t have a Christmas show last year we would give people a choice,” says director Helen Machin-Smith.

The two shows mix live music, stories and poetry, but in entirely different ways. “Christmas Memories” takes the audience to a small town in Wales, and a child’s view of the winter world a hundred years ago. The writing of Dylan Thomas (performed by Daniel Mayes) sets the tone: “All the Christmases roll down toward the two-tongued sea, and they stop at the rim of the ice-edged, fish-freezing waves, and I plunge my hands in the snow and bring out whatever I can find.” This year’s show brings Penelope Haskew’s delightful voice to join Mayes in music of the time, interwoven with the story. (December 14, 15, 19, 21, 23)

“Omnium Gatherum” is a different kettle of fish: “From the ridiculous to the sublime,” says Machin-Smith. It’s a carefully arranged mix of music, poetry, anecdotes and stories. Machin-Smith changes the show a bit each year: “I like a balance of things that are nostalgic, things that make people think, and that make people laugh. Unusual things that you don’t usually associate with a Christmas program.” (Shows December 18, 20, 22, 24)