Saturday, December 14, 2019 has been proclaimed Michael J. Cohen Day in the Town of Friday Harbor. It will be his 90th birthday. 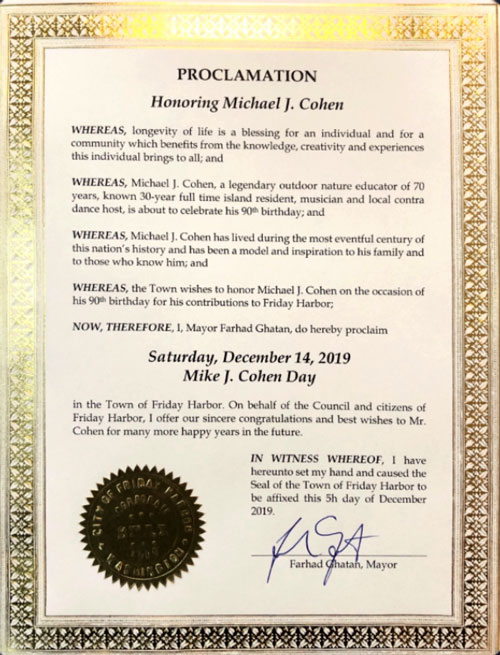 WHEREAS, longevity of life is a blessing for an individual and for a community which benefits from the knowledge, creativity and experiences this individual brings to all; and

WHEREAS, Michael J. Cohen, a legendary outdoor nature educator of 70 years, known 30-year full-time island resident, musician and local contra dance host, is about to celebrate his 90th birthday; and

WHEREAS, Michael J. Cohen has lived during the most eventful century  of this nation's history and has been a model and inspiration to his family and to those who know him; and

WHEREAS, the Town wishes to honor Michael J. Cohen on the occasion of his 90th birthday for his contributions to Friday Harbor.

"This is a noteworthy life event for anyone, and we with to honor Mike, as he is a distinguished member of our community. Founder of Project Nature-Connect, and a school in the discipline that boasts students worldwide, Mike has created and experienced much in his long life.

"Mike was raised in a forward thinking artistic and musical family. He has run a ski lodge in Vermont, a traveling school that took students around the country to learn from experiencing the natural world, compiled a repertoire of hundreds of fold songs and dances, and has participated greatly in the preservation of many aspects of our national folk culture.

"And he brought it all here to San Juan Island in the late 1990s, where he has enriched our island with his contributions to music, dance and education ever since. You see him at his contra dance, playing music at the farmers market, entertaining customers at the Cask and Schooner, and the residents at The Village, to mention just a few of his current activities.

"Friday Harbor would be much the poorer without Mike's cheerful presence and we would like to honor him as an indispensable community member."

"Anything and everything is attached to all that has gone before it and all that follows it. All are always present in the Now." ~ Revolutionary Wisdom 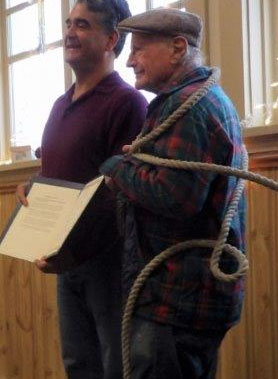 Mike Cohen said, "I thank the folks who put up with my nature-connected activities and "roped me" into this proclamation. I think it's really funny in comparison to the latest discovery in my saga, Lt. Col. Alexander Vindman. Compare how he was dressed when he was identified as a hero and note this connection I have made with him in the last few weeks: this U.S. Army official is a Jewish immigrant from Kiev, Ukraine. He said that he is grateful his family fled to the United States some 40 years ago, a place “where I can live free of fear for mine and my family’s safety.” He then spoke to his late father, saying “Dad, my sitting here today is proof that you made the right decision 40 years ago to leave the Soviet Union.”

Here's the connection (from Authentic Unification: The Heartfelt Art and Science of Revolutionary Wisdom, by Michael J. Cohen)

"Like any and every other person, I was biologically born of, with and as the same balanced and peaceful truth of the life of Nature that thrives in natural areas, things and people. In me its buried integrity lay abused and injured from the traumatic effects of the decapitation of my Jewish grandparent’s Jewish friend during the 1900 Russian pogroms in Kiev, Ukraine. They fled this disaster by immigrating to America where I was brought up aware, sensitive to, and defensive of abuse to my life as a Jew, even though it was a religion I seldom practiced. In 1938 such abuse was not unknown in my neighborhood. I remember that people attached to Gerald L.K. Smith and Father Coughlan beat the local rabbi with a rubber hose and got away with it since it left no bruises. I avoided these menaces by spending my time with friends in local natural areas where I loved to be; a vacant lot forest of towering sunflowers along with a rusty trashed stove comes to mind.

"When I was six, in 1936, during my first year of school, a legally required “abuse” of my left-handed biology made me uncomfortable. It was a rule that required that I, along with everybody else, write with my right hand. My posture, speech, happiness and family relationships deteriorated in response to it. In my distress, I discovered and defended a great trustable truth of my life, I was left-handed by nature and I was positive of it. That was an identity liferaft.

"Although, over three years, my family worked out a technological solution, a fountain pen, for the school’s unreasonable “writing righty” requirement, I remained acutely aware of my “lefty” truth being discriminated against and it upset me. To avoid its discomfort, I designed part of my life to protecting and strengthening my “great lefty truth” when possible. One helpful defense was that Lefty Gomez was an all-star pitcher for the New York Yankees.

"Other left-handers in my school classes were evidently not as sensitive to the school’s right-handed intrusion of their personal nature. They did not “righteously” resist becoming righty’s then and no doubt capitulated to other questionable demands as well. In the process they lost some of their natural lefty truth. That they were not as self-protective as I was about being lefty was an outcome of my family wisely being caring and careful, on-the-alert, persecuted Jewish immigrants.

"In hindsight, my "wisely being careful" revolutionary roots help explain how they led me to reasonably validate and defend Planet Earth as a living organism in 1965. This is why I can be my unusual natural-world self today and scientifically assist others to do the same." www.ecopsych.com/livingplanetearthkey.html