Valarie Keaton, President of the San Juan County Textile Guild says of the Tempestry Project, “Our exhibit reflects 100 years (every 4th year from 1918 to 2018) of climate date from the Olga weather station on Orcas Island.” The San Juan Islands Museum of Art (SJIMA) has recently featured major exhibitions addressing such topics as climate change, so the two groups thought to collaborate to bring the textile project to SJIMA until February 21. 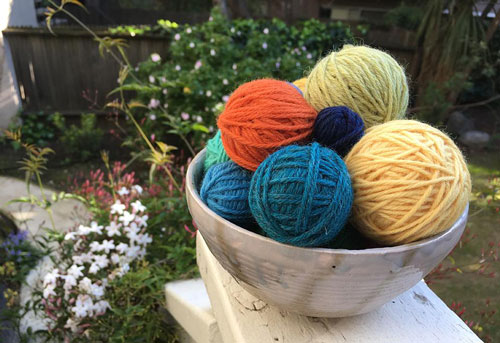 Working on a similar project for Glacier National Park, Stephanie Panlasigui states, “The completed projects are vibrant, beautiful, and tangible. You can pick up one year and lay it next to another year to compare.”

The Tempestry Project is an ongoing, collaborative, fiber arts project that presents climate data in a visual form through knitted or crocheted artwork. In the few years since the first Tempestry was knitted, panels have been created by fiber artists in nearly every US state and more than 20 other countries. Multiple works are displayed together to show change over time. The yarn colors are standardized for each 5-degree temperature range. US temperature data, collected from the National Oceanic and Atmospheric Administration (NOAA) weather stations, is available on the web.

The project began in 2017 in Anacortes, Washington, US, and has since spread throughout the country and around the world. Prior to coming to SJIMA, the project was on display in La Connor, WA last May. The name “tempestry” is a blended word from temperature and tapestry and describes the finished project.

According to Justin Connelly who helped create the first Tempestry project, "The science articles talk about what's happening at the poles. For many people, that's not their experience and so they don't relate to it in a powerful way...but even here [outside Seattle], in a temperate place, you can see stark change over the last 40 years or so. It puts it in their backyard."

Taking the idea further, Erika Zambello came up with the idea of a National Park Project. She hopes to get two textile sets made for every National Park Site: one for the year the park was founded and one for 2016, the 100th anniversary of the National Park Service.

As the textile artists work, they exchange questions, memories and hopes, and projects just finished. Stephanie said, “By the end of this project, we will create over 200 tempestries that will represent over 73,000 days of data. Not only that, we are also creating a community that brings human connection to the climate change discussion, as we talk about how the 21st century will change places we love.”

SJIMA is open Friday-Mondays, 11-5. SJIMA members and those 18 and under are admitted free. Regular admission includes this Tempestry project as well as Cathryn Mallory’s Tide of Transition and the Annual Artists’ Registry show featuring the best work of 70+ area artists.

More in this category: « How you can help Australians Jan. 25: Local brewery at 11th Annual Belgianfest beer tasting festival in Seattle »