Friday Harbor has long been touted as an art destination, and with good reason.  Painters, sculptors, potters, fabric artists, musicians and writers thrive and find creative inspiration living in the San Juan Islands.  Two local artists, Jayne Siroshton and Jan Murphy have joined forces to bring art and purpose together to help in a cause they are both passionate about – Animal Welfare. 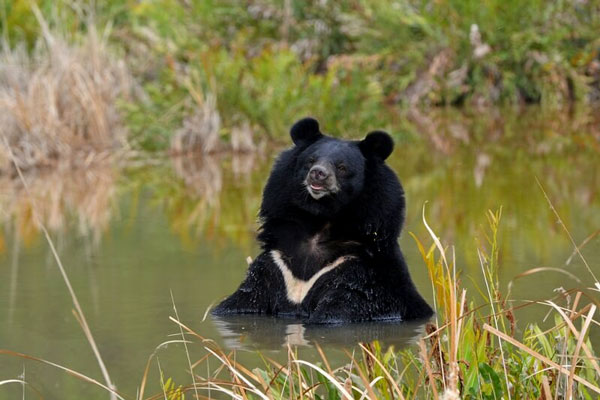 The idea began to take shape several months ago when Siroshton and Murphy, both long-time animal welfare activists, began discussing the plight of Asiatic Black Bears, or Moon Bears as they are known in China and Vietnam.  The two wanted to find a way to bring awareness to the work of Animals Asia, an organization founded almost 25 years ago to bring about an end to the suffering of Asiatic Black Bears, or Moon Bears, used for bile extraction in many parts of Asia.   After several meetings and lots of brainstorming, the two hit upon an idea; an event that would utilize the artistic talent of local islanders and help raise consciousness as well as funds for the organization.

The duo set a lofty goal.  They hope to raise $25,000 and use the money to sponsor a rescued moon bear on behalf of the San Juan Island community at one of Animals Asia’s two sanctuaries.   The bear rescued and sponsored through their efforts will be named, “Friday”, which is why the project has been dubbed, “A Bear Called Friday”.  Since their initial discussion, Siroshton and Murphy have gained the support of several other San Juan Island Artists and will host an art show and auction at Brickworks, June 17, with 100% of the proceeds going to Animals Asia.  In addition to Siroshton and Murphy, the artists who have agreed to donate artworks to the sale are, Jaime Ellsworth, Barbara Duzan, Lisa Lamoreaux, Alison Engle, Shannon Borg, Teresa Smith, Laura Bauer, Gretchen Allison, Pamela Hoke, Winnnie Brumsickle and Lauren Jawer.

Artist and Author, Jayne Siroshton owns Rookscroft, an art gallery and retail space in Friday Harbor.  Jan Murphy has been actively involved with Animals Asia for over 22 years and currently serves on their US Board of Directors.

The A Bear Called Friday Art Sale and Auction will feature wines and ciders served by Madrone Cellars, a silent auction and a video presentation highlighting the life-saving work being done by Animals Asia.  The event takes place from 5:00 to 7:00 and admission is free.

If you are a San Juan Island based artist and would like to participate in the project by donating your work, please contact Jan Murphy at (360) 298-2195.

More in this category: « March 4 - 18: Best of the Friday Harbor Film Fest focuses on farming solutions Orcas Islander John Morris purchases a Toyota 4-Runner to help those in dire need in Liberia »