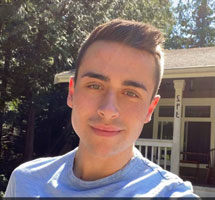 Griffin Cuomo, 23, a Class of 2017 Friday Harbor High School graduate, was stabbed to death Tuesday, April 19, 2022 in his Anaheim, California apartment.  His roommate  23-year-old Jonathan Bahm was also murdered. The alleged killer is a co-worker of Cuomo's.

Both Cuomo and Bahm  graduated from Chapman University in May 2021.

The university cancelled classes after the victims were identified Wednesday.

Students and professors wrote of their memories of Griffin Cuomo on the university's blog.  Here are a few excerpts.

- Griffin was the most hardworking, easy going, friendly person in my com classes. He was one of those students that left a positive impact on everyone around him.

-Hundreds of students enter and exit our lives during the course of a teaching career, but only a few make such an impression on us that we remember them vividly after they have moved on.  Griffin was one of those students.

-Griffin was the kind of student that showed up with passion, kindness, and a contagious curiosity. He brought these ideals to the classroom consistently, creating a more positive, engaging learning environment for himself and his peers.

According to law enforcement the motive for the killings is unclear. Fahim is being held without bail, arraignment is set for May 6. Charges filed against him include two counts of murder, lying in wait, multiple murders, and the personal use of a deadly weapon.

The Mercury News has a detailed article about the murders.