Shorelines play a vital role in ocean health, but they’re also the areas most susceptible to human disruption. Unnatural structures like sea walls and roads disrupt a beach’s ability to sustain itself, inhibiting and sometimes destroying important plantlife and fish species in the process. 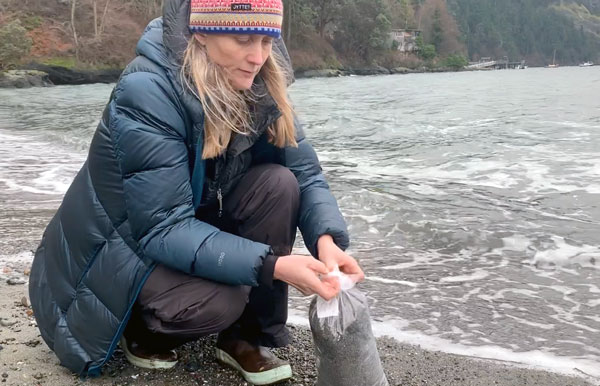 The prestigious award was given to Tina Whitman, Director of Friends of the San Juans, whose work has had direct conservation impacts in the Salish Sea.

But figuring out which shorelines need to be protected and which need to be restored is not simple. Science is the essential underpinning for identifying critical habitat.

The SeaDoc Society is awarding the prestigious 2022 Salish Sea Science Prize to Tina Whitman, Science Director at the Friends of the San Juans for producing science that led to copious beach habitat protection and restoration throughout the San Juan Islands. Whitman received the no-strings-attached $2,000 cash prize at the 2022 Salish Sea Ecosystem Conference on April 28, 2022.

The Salish Sea Science Prize is designed to highlight the important role science plays in conservation by recognizing someone whose science has resulted in positive conservation outcomes. Whitman’s work exemplifies that spirit.

Prior to Whitman’s arrival 20 years ago, shoreline conservation was largely an improvised process that lacked data or direction. In the ensuing decades, she and her team have mapped hundreds of miles of shoreline in the San Juan Islands and restored numerous beaches to their natural state.

“The lack of data was limiting the effectiveness of our existing policies and regulations, so we stepped in to fill that gap,” said Whitman. “Once you have the data, you have the opportunity to protect and restore shoreline habitat.”

Not only do these restored beaches allow eelgrass and other shoreline habitats to thrive, but it also benefits spawning forage fish and out-migrating migrating salmon, both of which are crucial to a healthy food web.

In the midst of the pandemic, Whitman and her team of collaborators fully restored a scientifically-identified important shoreline and marsh area in Sucia Island State Park that will now provide key habitat for forage fishes and juvenile salmon.

“We were able to completely remove a low-lying coastal road and the associated fill and shoreline armoring and a small culvert that was blocking fish passage,” said Whitman, whose team worked closely with Washington State Parks on the project. “Pulling out that road and allowing the tide waters to come back in after 80 years was really satisfying.”

Her leadership in San Juan County’s strategic salmon recovery “Pulling It All Together” project will continue to guide salmon restoration work in the region for the next decade.

“Tina’s scientific products are the background work that goes largely unheralded but forms the critical backbone of a wide array of issues important to marine preservation, restoration, regulations, and policies,” said SeaDoc Science Advisor and Director of Friday Harbor Labs Dr. Megan Dethier. “[It] has allowed research and restoration funds to flow to the region because of the solid scientific base it has created.”

The SeaDoc Society is honored to award the 2022 Salish Sea Science Prize to Tina Whitman with Friends of the San Juans. This prize is given in honor of Stephanie Wagner who loved the region and its wildlife.