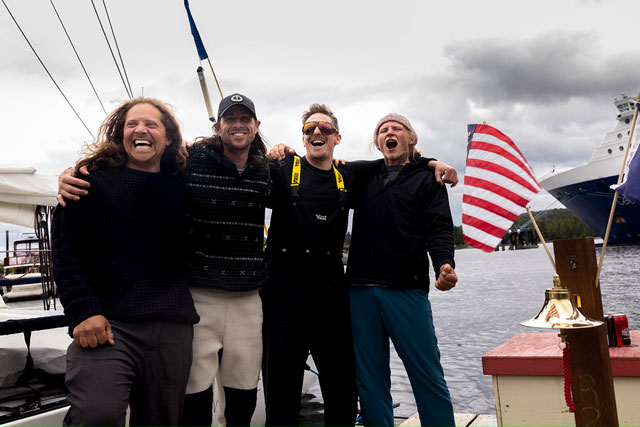 TRACK the PROGRESS.  Wednesday, June 22, 2022: From the R2AK website: Team Elsewhere wins the steak knives in the 2022 Race to Alaska! If those aren’t faces of pure elation, we don’t know what is. These guys finished the race in 6 days, 6 hrs, 32 mins—first steak knife winners in the history of R2AK to take the outside route around Victoria. Also the first to do the race with an inboard human propulsion system. Check out the race's Facebook page and watch video of the team's finish. 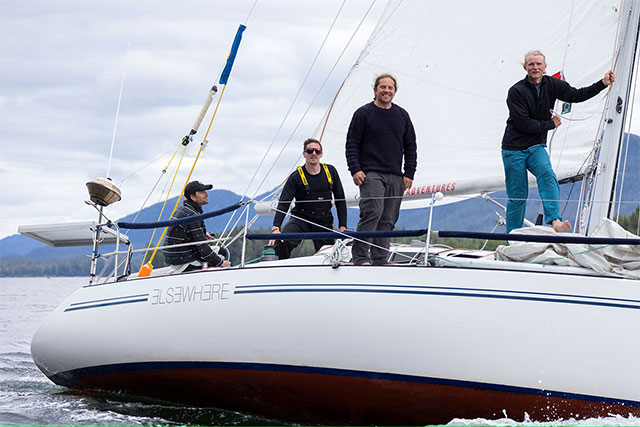 PREVIOUS UPDATES: Team Pure & Wild finished first in the Race to Alaska on June 20. Just after midnight, June 22, Elsewhere was still dueling Fashionably Late in a race for second place. or as R2AK says, "Team Elsewhere with 89 NM to go until Ketchikan, Team Fashionably Late with 98 NM to go. The battle for the steak knives is on."

According to the R2AK website: "There’s a race that’s glowing hot between the darkhorse bids of Team Elsewhere and Team Fashionably Late for the coveted second place steak knives. The battle for the steak knives is as ridiculous as it is real.

"This is a surprise, and maybe to no one more than the teams themselves. The everyman sailing pros onboard Team Elsewhere’s Soverell 33 are the regular kind of awesome. Sailing pros, unadorned by Olympic medals or big wins from marquee races, they’re sailing a cult classic that on paper is seriously undergunned compared to the trimaran fleet who they started against.

Team Fashionably Late have matching outfits, seem to take as much time feeding their social media as they do sailing hard or distributing joy and cocktail fixins. Their Dash 34 is punching way above its weight class and punching through the log jam of the inside seemingly unscathed. Our emerging theory on their success is either that sailing fast is actually fueled by having a good time and matching outfits, or it’s all a ruse to downplay their skills in the most entertaining, cutthroat-with-a-smile rope-a-dope we’ve ever seen. It’s like if Mike Tyson gave his opponents Beanie Babies instead of biting off their ears.

"...Teams Dark Star and Sockeye Voyages have been battling it out for the coveted Final Finisher Award for four days."

Pocket Rockanauts is out of the race.

Race to Alaska is back for year six after a two-year COVID-induced hiatus, and teams Elsewhere, Pocket Rockanauts, and Sockeye Voyages from Friday Harbor are three of the 49 teams at the starting line on June 13. No motors or support allowed—the R2AK is about the physical endurance, saltwater know-how, and bulldog tenacity that it takes to navigate the 750 cold water miles from Port Townsend, Washington, to Ketchikan, Alaska.

“As these teams sail into the forgotten reaches of our coastal wilderness, the stories that do come out will be incredible,” says Race Boss Daniel Evans.

Teams embark on Stage 1, “The Proving Ground,” from Port Townsend on June 13 at 5 AM; they have 48 hours to cross the Strait of Juan de Fuca and make it to Victoria, BC.

June 16 at high noon marks the start of Stage 2, “To the Bitter End,” the 710-mile trek from Victoria to Alaska.

This year, the removal of one of only two waypoints between Victoria and Ketchikan, Seymour Narrows, gives racers the choice of going up the inside of Vancouver Island or going out of the Strait of Juan de Fuca into the Pacific Ocean—opening up a new realm of possibilities as teams endeavor to solve the R2AK puzzle.

The Race to Alaska is a project of the Northwest Maritime Center in Port Townsend, WA. A 501(c)3 non-profit organization whose mission is to engage and educate people of all generations in traditional and contemporary maritime life, in a spirit of adventure and discovery.

More in this category: « Congratulations to Regional Special Olympics winners from Friday Harbor “Rusty," the giant crab back at the Sculpture Park on San Juan Island »