Jet, a nationally certified Crisis Response Canine and his handler Cynthia Parkin will be working with the Sheriff's Office. They have been working with the San Juan Island Fire and Rescue Department since earlier this year. Parkin is working on creating community partnerships with many organizations. 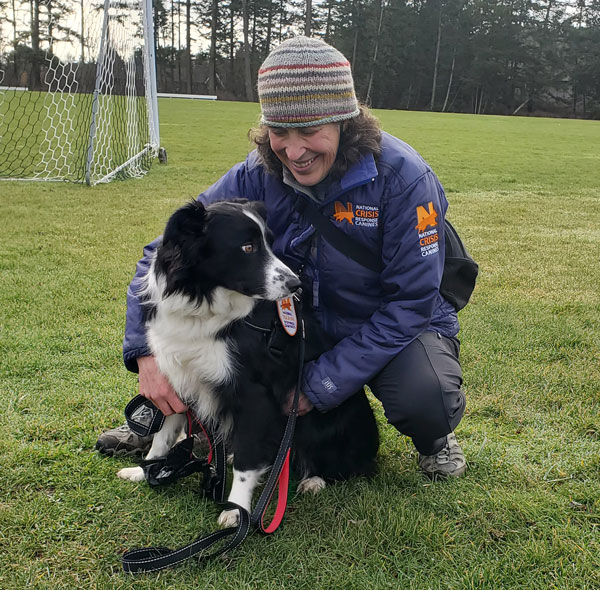 Sheriff Krebs anticipates utilizing Jet's many capabilities on calls such as, domestic violence, assaults on children, Child Protective Services calls where children are being contacted, or any incident with a degree of emotional trauma or stress among many others.

Learn more about Crisis Response Canines program and about Parkin and Jet in this article "How does a crisis response dog help people?" originally posted in February 2022.

How does a crisis response dog help people?

Dogs are popular in the San Juan Islands. There are service dogs, family pets riding shotgun, dogs tied up outside the grocery store waiting for their human to finish grocery shopping. There are the PADS for Parkinson's dogs that have been trained to sniff out Parkinson's disease. And now there is Jet. This calm friendly border collie is a Crisis Response Canine.

Cynthia Parkin moved with her family to San Juan Island from Alaska after her husband Tony became IOSA's Executive Director. (Update: He has since stepped down from that position) Their son Oliver is a student at Friday Harbor Middle School.

In November, 2021, Cynthia and Jet went back to Alaska to finish up training and take the three-day Competency Evaluation in the Anchorage area. Teams were exposed to a variety of settings and locations. After completing the three-day evaluation, Jet became a Certified NATIONAL Crisis Response Canines.

So what is a Crisis Response Canine? The program harnesses the bond between canines and humans. 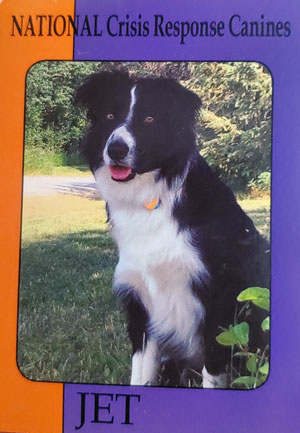 Crisis Response Canines comfort people who have experienced traumatic events. From families who watched their homes burn down, to nurses who are stressed from working in  overcrowded hospitals, to veterans back from war zones. The dogs can be used to comfort anyone who is hurting.

The National Crisis Response Canines website explains what the dogs do: "The element common to all crisis is the breaking of bonds. In crisis, we are forcefully separated from the people and places that mean the most to us. We are hurt, we are alone and we are not safe. The things, feelings, emotions we have that connect us to one another are thrown into turmoil, disarray and distortion.

"Without realizing it, our survival instincts of fight-flight-freeze are instantly transforming our behaviors and physiology to insulate us and protect us from harm. In the short term, these changes help us to survive in the minutes and hours immediately following the crisis. But these very things we depend on for survival -isolation, hyper vigilance and focus, increased adrenaline and heart rate - can have debilitating effects if they persist for too long.

"NATIONAL Crisis Response Canines provides canine teams that are trained to gently, safely break through the barriers of isolation caused by crisis, allowing individuals to re-connect to their families, friends, school mates, church fellowship and other cherished social supports.

"In the presence of the canine, the individual experiencing crisis instinctively begins to feel safer and protected, quieting the need for fight-flight-freeze."

When Cynthia first researched joining the program, she was asked what kind of dog she had. Her answer 'Border Collie' surprised others since that species is usually known for its energy and herding ability. Cynthia knew Jet, an extremely empathetic dog, would be a good fit. A variety of breeds have become Crisis Response canines.  Cynthia has had Jet since he was eight-weeks-old. Dogs must be 18-months-old to begin the six-month training program.

Cynthia said she is hoping to network with the court systems and the schools. She noted that the handler's focus is on the dog's well-being. Their number one job is to make sure the dogs aren't overwhelmed. Crisis Canines live with their handlers and are a part of the family.

The services are free. The dogs and their handlers can respond to other areas of the nation. The handlers have learned Psychological First Aid and have been trained in FEMA levels 100 and 200 which include incident command.

If you are interested in knowing more about Crisis Response Canines please email cynthiaparkin.national@gmail.com.