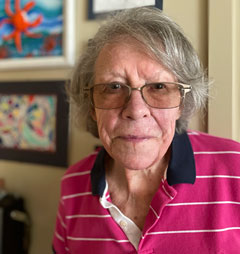 Carol Breeden has never been afraid of an adventure or hard work; these were the first things I learned when I sat down to interview Carol on July 8, 2022.

Carol was born and raised in Forsyth, Montana, a town one hundred miles east of Billings, Montana. She was raised on her parent’s ranch with her two brothers. Carol spent every summer working hard on her family’s ranch driving tractors, though she often reminisced throughout our conversation that she worked harder at getting distracted from her chores by going to the movies or getting ice cream with her brothers.

When Carol met her husband, they decided to move to Alaska to, “see what all the hubbub was about”. Carol spent her first months in Alaska as a bush pilot, while her husband fished the off the coast of Alaska. Carol noted that during her adventures across Alaska, she had her fair share of encounters with dangerous wildlife, such as large bears.

After a while working as a bush pilot, Carol decided to settle down into a job as a banker. She continued to work at a bank until she and her husband decided to move to Friday Harbor, Washington to be closer to friends and family. When asked why she moved to Friday Harbor, Carol stated that she moved here because the weather was moderate, and the community was small. Carol and her husband built their house on San Juan Island by hand and lived there until Carol decided to move to the Village at the Harbor.

Since Carol has been a resident of the Village, she has enjoyed socializing and painting. Carol loves surrounding herself with memories of her adventures, and has paintings, photos, and memorabilia from Montana and Alaska throughout her apartment.

Thank you, Carol, for letting us interview you.