In the summer of 2022, NASA's James Webb Space Telescope (JWST) released images from some of its earliest observations with the newly commissioned telescope. In September,  new versions of Webb’s first images combining its infrared data with X-rays collected by NASA’s Chandra X-ray Observatory, underscored how the power of any of these telescopes is only enhanced when joined with others. Filters manufactured by Luxel Corporation, located in Friday Harbor, are part of the Chandra  X-ray Observatory. 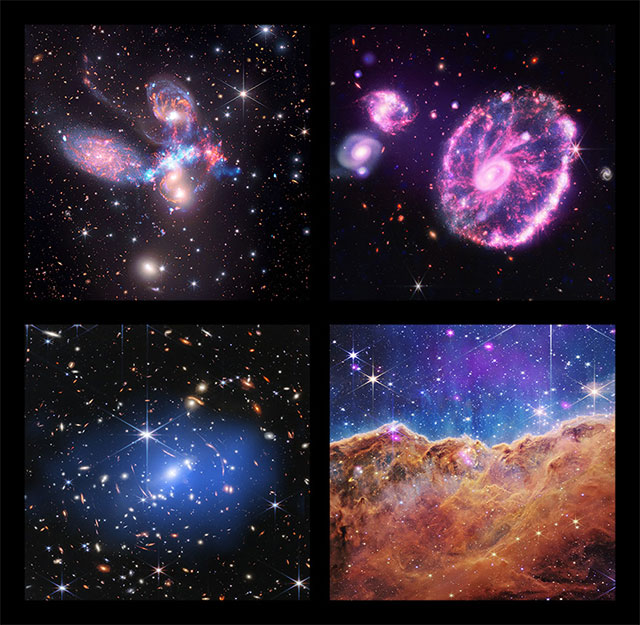 These four objects were among the first images released by the telescope after it finished its commissioning process.

Astronomers plan to combine data from these telescopes for many different objects in the future.

JWST is designed to see the cosmos in infrared, so its work is particularly enhanced when combined with instruments that observe space in different wavelengths of light, such as Chandra with its X-ray vision. Chandra data generally show higher-energy phenomena (like superheated gas and the remnants of exploded stars) than Webb’s infrared view.

The first images to be given an upgrade with Chandra X-ray data reveal new features that weren't visible to JWST alone and they plan to partner the data from the two telescopes in the future to investigate many different objects, according to a NASA statement.

NASA's Chandra X-ray Observatory is a telescope specially designed to detect X-ray emission from very hot regions of the Universe such as exploded stars, clusters of galaxies, and matter around black holes. Because X-rays are absorbed by Earth's atmosphere, Chandra must orbit above it, up to an altitude of 139,000 km (86,500 mi) in space. The Smithsonian's Astrophysical Observatory in Cambridge, MA, hosts the Chandra X-ray Center which operates the satellite, processes the data, and distributes it to scientists around the world for analysis. The Center maintains an extensive public web site about the science results and an education program.

Chandra carries four very sensitive mirrors nested inside each other. The energetic X-rays strike the insides of the hollow shells and are focussed onto electronic detectors at the end of the 9.2- m (30-ft.) optical bench. Depending on which detector is used, very detailed images or spectra of the cosmic source can be made and analyzed.