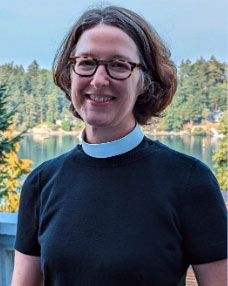 St. David’s Episcopal Church, Friday Harbor is pleased to announce the call of the Rev. Cristi Chapman to serve as rector at St. David's. Cristi's first Sunday to celebrate the Eucharist at St. David’s will be on November 6th, All Saints' Sunday.

Cristi graduated from the Seminary of the Southwest with a Master of Divinity in May 2017. She was ordained to the priesthood in June 2017 in the Diocese of Olympia. After ordination, Cristi served at Saint Mark’s Cathedral as curate and then as an Associate to the Rector and Canon for Spiritual Growth and Stewardship.

In her last call, Cristi served as the Executive Director of the Mission to Seafarers in Seattle. During that time, she also regularly served as supply priest for congregations in the Seattle area. Cristi’s diocesan commitments include serving as the convener for the Budget and Finance Committee, a member of the Joint Finance Panel, an ex-officio member of Diocesan Council, and as a past member and convener of the Stewardship Commission.

Prior to ordained ministry, Cristi served as a CPA for 20 years. For 15 years, she held several senior finance roles at the University of Washington.

Cristi’s ministry is one that focuses on inclusion, connection, and hospitality. She firmly believes that every encounter holds the possibility for transformation. The common element that continues to connect all of Cristi’s vocational callings is stewardship, especially the integral connection between mission and money.

Cristi and her husband, Chris, celebrated their 30th wedding anniversary this September. They are the proud parents of their daughter, Madeline, who turns 21 this fall.

Some of Cristi’s passions include gardening, knitting, and hiking. She also helps Chris tend a small backyard vineyard at their house in Seattle. Cristi and Chris also like to travel, especially to Holden Village in the North Cascades and to Japan. (Yes, those are very different places!)

Finally, she serves as the human caretaker to a seven-year-old GoldenDoodle, Eshy.

More in this category: « A survivor of Domestic Violence speaks Friday Harbor Scarecrow Contest Winners are.... »