A couple of weeks ago as the playoffs loomed the subject of state championships came up between Friday Harbor High School head soccer coach Brett Paul and his mother, Kathy Paul. Brett, like many on San Juan Island, wondered if the Wolverines would bring home Friday Harbor’s first state championship trophy if they won the 2022 Class 1B/2B title. Brett, who would eventually guide Friday Harbor to a state title victory over defending champion and cross-water rival Orcas Island, was reminded by his mom: A first-place finish in soccer would be the school’s second championship. 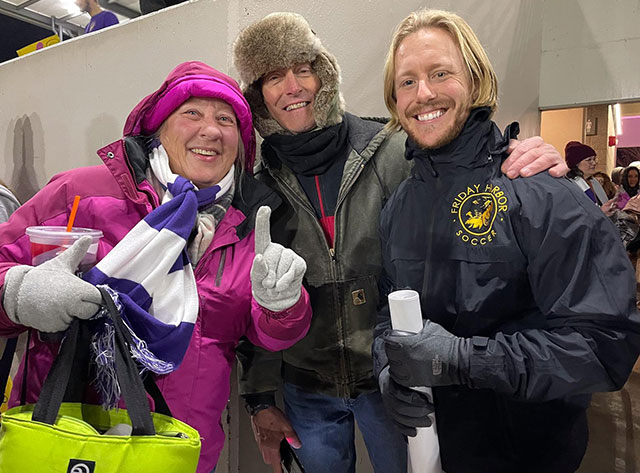 Kathy and Roger Paul celebrate with their son Brett after he coached the Friday Harbor soccer team to a state championship November 19, 2022. Cynthia Parkins photo

Kathy should know: Before she was an ultimate soccer mom to Brett and his older brothers JoHannes and Louis, she assisted in Friday Harbor’s first state championship in 1986 as the volleyball team’s assistant coach.

JoHannes and Louis also coach their daughter’s Island Rec youth soccer teams. “It’s so sweet,” Kathy said. “My boys are sixth generation islanders — that’s very important to me and I never thought they would end up living here as adults.”

Brett thanked his mother and father, Roger Paul, for their dedication in supporting his athletic pursuits throughout the years. The family continued to cheer him on at the state finals and Kathy beams when asked about her youngest son’s latest achievement.

“I’m very proud of him,” Kathy said. “Not just for the talent of being a coach, but being the person that he is. I think that is the higher priority in importance of getting the team to where they got to — being first.

“I’m just touched to be living in this community, because it took the community to get us to the win.”

The former coach could relate to her son’s path to a championship. Similar to Friday Harbor’s soccer team placing fourth last season and then finishing first the next year, the school’s volleyball squad finished third in 1985. “Diane Axelson was an excellent head coach and I knew how to follow,” Kathy said.

Like her son, Kathy was impressed with the Wolverines’ finish. “It’s awesome. The kids worked hard. I saw them step up and play in a way that they have not played as a team. Individually as well, some of the kids, I just felt had more potential during the season and they showed it and proved it this last weekend at state. And I’m very proud of those boys for that.

“They figured that out somehow in themselves…That was a thrill to see that.” 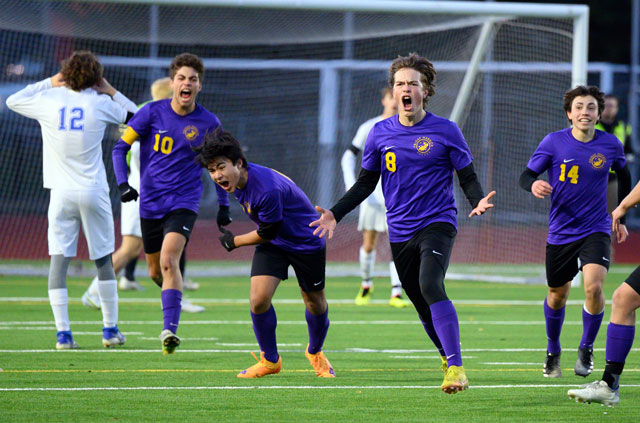 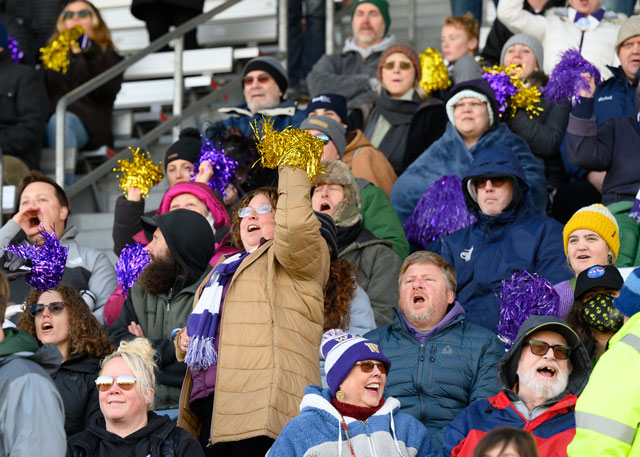 Wolverine fans cheered on the team. Photo by Matt Pranger

Another island soccer family contributed to the state title by nurturing Brett’s soccer career. Ron Duke was coaching the Wolverines when Brett’s oldest brother JoHannes was playing. Brett, as a 6- or 7-year-old, would attend practices and matches so regularly that the coach made him the team’s ball boy. Eventually, when Brett was a bit older but still much younger than the high schoolers, he would scrimmage with the varsity when the team was short of players.

Ron’s son Andy Duke took over the team and coached the middle Paul boy — Louis. He recalled during practices Brett would spend hours shooting and then retrieving the ball from the goal at the other end of the field.

“Brett was always so eager, wanting more…I knew he would make a great coach,” Andy said.

The Wolverines faced some rigorous Class A competition when Brett started varsity for four years for the younger Duke. “That helped build character,” Andy said.

Brett’s former coach was excited when Brett was selected Friday Harbor’s head coach a few years ago and is pleased with his former player’s success.

“My dad and I are pretty proud of what he’s done with that team,” Andy Duke said.

“They are so good to him and have encouraged him and supported him so he could support the community as well,” Kathy said.

Supportive parents. Encouraging coaches. A caring community. “It’s just comes into place,” Kathy said. “It helped Brett do what he did last week.”

More in this category: « At SJIMA: A Different Perspective - M.J.Anderson