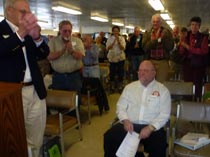 Glenna Hall and Vince Dauciunas were re-elected to the two San Juan Island positions on the OPALCO Board of Directors at the 77th Annual meeting onboard the Hyak on May 3, 2014. Steve Hudson came in a close third in the election.

Co-op members can all vote for candidates representing the different islands. The terms for the representatives from each island expire in different years.

Participants at the co-operative's meeting listened to a report from retiring General Manager CEO Randy Cornelius who stressed that 97 percent of OPALCO's business is buying and delivering electricity. Some members had questioned OPALCO's providing access to broadband through it's Island Network program.

Cornelius got a standing ovation from the audience who appreciated his 12 years of service to the co-op. 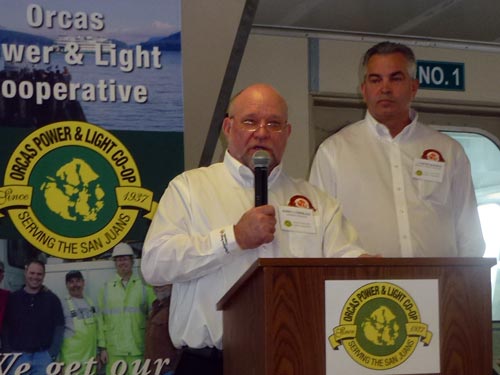 Foster Hildreth who will become General Manager when Cornelius retires in September 2014 said commended Cornelius on his leadership and described him as the most genuine person he's ever met.

One-third of the linemen at OPALCO have been hired through its apprentice program.

Part of the co-op's focus on renewable energy includes plans to place solar power equipment on schools in the county.

Wi-Fi is now available at the Orcas, Lopez, Shaw and Friday Harbor terminals for co-op members who sign up for paperless billing. The savings obtained from customers switching to paperless will pay the costs of providing the Wi-Fi service.

County Councilmember Rick Hughes is leading the effort to make Wi-Fi service on the ferries.

The federal auditor said OPALCO represents a model to demonstrate to other utilities how it's done according to Cornelius.

One of the upcoming concerns OPALCO is working to address is a move by Bonneville Power Administration to start charging OPALCO for delivery. BPA will allocate the monthly cost based on the highest hour of energy use. 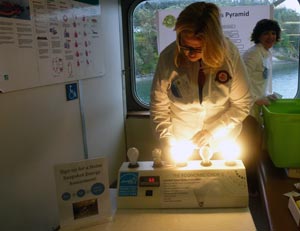 Besides receiving an update on their cooperative's health, attendees at the annual meetings also get a free lunch in a reusable insulated bag; a gift bag that this year contained two LED light bulbs and a calculator and a chance at winning donated prizes ranging from a chainsaw to a camera to sweatshirts.

The following information is available online:

FREE Wi-Fi at the ferry terminals.

SURVEY - complete it and receive $5 off your OPALCO bill 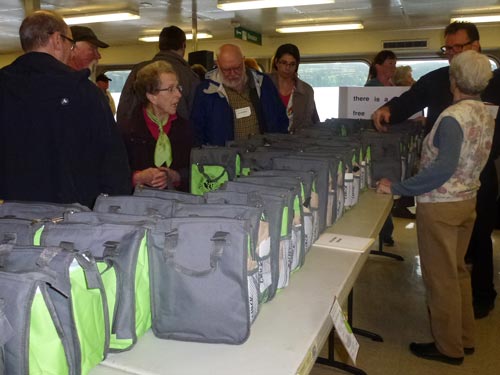