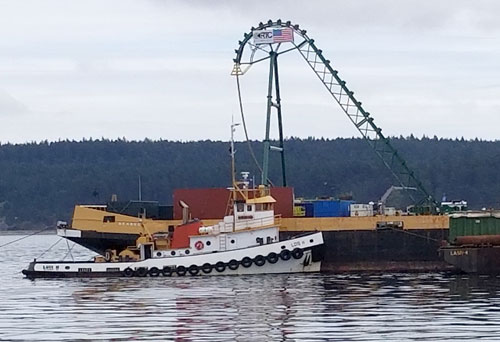 It looks a bit like a carnival ride, but the equipment on the large barge between Lopez and San Juan Islands is used for an essential project. The crew is laying OPALCO's new power and fiber cable to replace  an oil-filled power cable installed in 1977.  The 2.6 mile long cable is in one continuous piece and stretches between Otis Perkins County Park on Lopez Island to a property on Pear Point Road on San Juan Island. 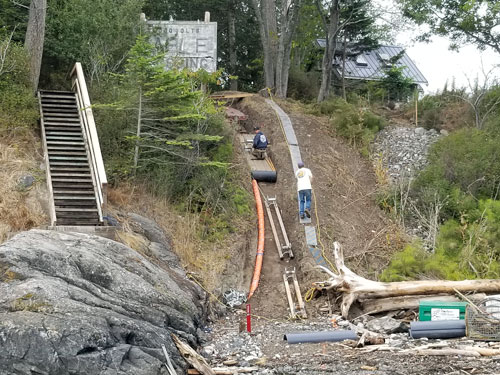 The orange cable belongs to CenturyLink. The cable crossing sign will be replaced by OPALCO.

Otis Perkins County Park on Lopez Island. The vault, which is shared by OPALCO and CenturyLink is located to the left of the picnic table.

The armored cable, manufactured by Sumitomo USA, provides 69 kilovolts of power and contains 144 fiber optic strands. It is expected to last 50 years. Once installed OPALCO will run both the new cable and an already existing cable at the same time. According to OPALCO, running both extends the life of the cables.

Sumitomo  held a decommissioning ceremony for the 1977 cable  in 2016. The new one is named the George Goff Memorial  cable.  A third cable installed in 1990, the Furikawa cable is still in service and energized in that crossing. Once the George cable is energized there will once again be redundancy.

The 1977 cable used mineral oil, the standard at the time. Before the cable could be lifted out of the water, the oil was removed. The new cable is armored and has multiple protection layers so the failure of a single barrier will not cause failure of the whole cable.  A glitch in the removal process was due to CenturyLink's cable had moved and was on top of part of OPALCO's cable. The utilities worked cooperatively to resolve the issue.

When divers inspected the 1977 cable in 2011 they found "damage to the outer cable covering due to tidal action, boat anchors dropping and catching on the cable and general disintegration of the outer cable materials, as is expected in the rough marine environment."

The new cable weighs 34 pounds per foot. According to OPALCO, with that much weight, it doesn't need to be anchored down.

According to OPALCO's website the benefits of the project are:

Maintain a power infrastructure that will support power use in the San Juan Island for the next 50+ years.

New cable has a no- to very-low impact on the sensitive marine environment. The multiple layers of protection built in replace the need for an oil-filled cable, as the 1977 cable was.

Install fiber optics (144 strands) for remote monitoring of submarine cable (cable condition, power quality and fault prediction), redundancy in our communications connection to the mainland and increased capacity for county-wide fiber communications. Purchasing 114 strands cost no more than 12 strands would.

OPALCO provides electrical service to 20 island and has 26 submarine cables in its system. Many will require replacement in the next 20 to 30 years.

A rough estimate of the approximately $15 million cost includes:

Removal of old cable: $2.6 million plus $3 million mobilization and de-mobilization

Installation of new cable: $2,930,000 plus $3 million mobilization and de-mobilization costs

Errors about the names of the cable have been corrected. We apologize for the mistake.

More in this category: « Lots of Opportunities to Participate in Your Local Co-op OPALCO Board Member Jim Lett to Retire; Candidates Sought for Board Appointment »