On Tuesday, May 28, 2019, leadership from OPALCO and T-Mobile met with Governor Inslee to share the Rock Island Communications broadband success story in support of the Governor’s new statewide broadband office and initiatives. With its robust fiber and LTE foundation in place, OPALCO is excited to help move some of Governor Inslee’s key initiatives forward including Southern Resident Orcas Whale Survival, Clean Energy and Economic Development. 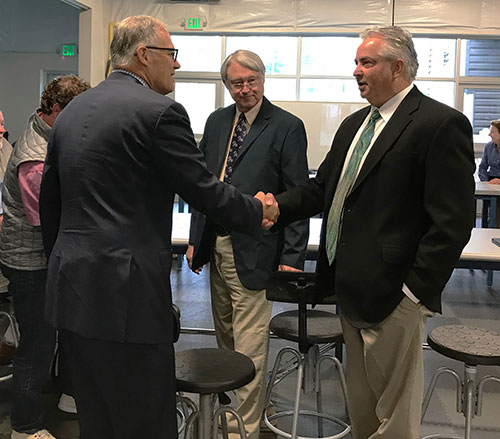 “Our success with broadband is already having a dramatic effect on the quality of life, safety and opportunity threshold for our rural, remote residents in San Juan County,” said OPALCO Board Member Vince Dauciunas. Lawlor added that T-Mobile is replicating the OPALCO-Rock Island success story as a model for other rural communities to address critical issues such as education, telemedicine and public safety. 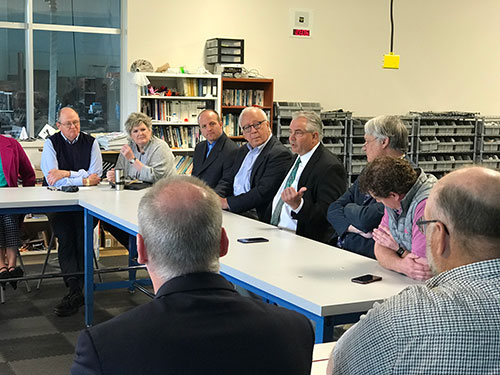 Governor Inslee applauded OPALCO and it’s team for their innovation and progress. “The digital divide should not limit any Washingtonian’s ability to learn, innovate or connect through robust internet access,” said Inslee, “whether it is students researching ideas at home, first responders handling an emergency or entrepreneurs launching a business.” Broadband also gives us the tools in San Juan County to support the monitoring, operations and charging of electric ferries on our island routes, which improves conditions for the whales and reduces carbon pollution in our biologically diverse corner of the Salish Sea.

“Our fiber infrastructure is essential for the clean energy future envisioned by Governor Inslee,” said Hildreth. “With our communiations backbone already in place, OPALCO is decades ahead of most utilities and is positioned to realize a zero-carbon footprint in our lifetimes. We owe a debt of gratitude to the forward thinking OPALCO board members who directed us toward fiber way back in 1999; to our members who are showing their support of Rock Island as subscribers; and we couldn’t have achieved so much so fast without the expertise of our partners at T-Mobile USA.”

Orcas Power & Light Cooperative (OPALCO) is our member-owned cooperative electric utility, serving more than 11,400 members on 20 islands in San Juan County. OPALCO provides electricity that is 97% greenhouse-gas free and is generated predominantly by hydroelectric plants. OPALCO was founded in 1937. Follow OPALCO @OrcasPower on Facebook and Twitter.