OPALCO PRESS RELEASE: Our local line crew is working on a large project to rebuild and strengthen the electric distribution line that connects Roche Harbor and Friday Harbor substations. The project included installation of 29 new 45-foot poles and 1.56 miles of new 3-phase distribution wire which will increase the capacity of our system on San Juan Island and builds greater redundancy to manage power during outages and periods of high demand. The larger conductor size will reduce voltage drop and system losses. 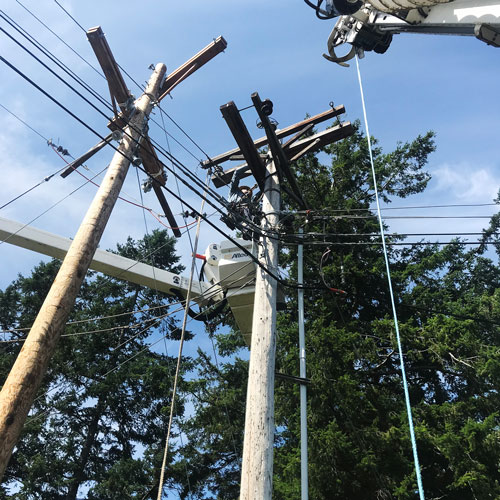 Crew building out a key corner with extra-strength cross arms and guy wires. Photo by OPALCO

The crew was able to work with live (energized) 12.5 kilovolt lines, which is a specialized skill that minimizes the service disruptions during major construction projects. Two of the three phases were de-energized, and the third phase was moved away from the work area onto hot arms to give the crew a safe space to construct the new equipment. Once the poles are built out, all three phases of the wire will be moved onto the new poles.

This project is part of a major conversion project that began in 2011 at Douglas Road. Some sections were converted to underground and others overhead upgrades. The final phase of the project will start in 2020, connecting San Juan Valley Road to Boyce Road and completing the circuit between the two substations and more than doubling the capacity of the system. 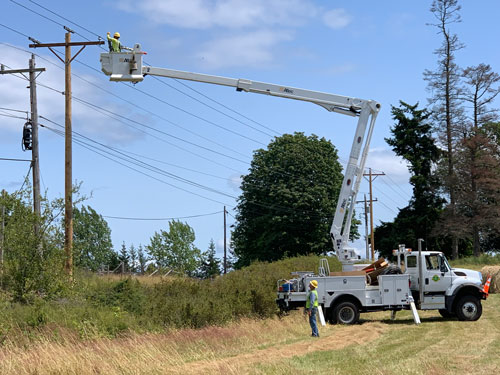 Crews at work on San Juan Valley Road Hot arms in place to keep energized lines away from the work area. OPALCO linemen have specialized skills to work hot – with live lines.

OPALCO is proud of its skillful linemen and engineers who have designed and built this major improvement to our system. The new lines will be here for the next 50 years or more, providing power to meet the needs of our island community. OPALCO is grateful to San Juan County Public Works for their help on the project; they reduced the speed limit along the stretch to protect our crews at work. 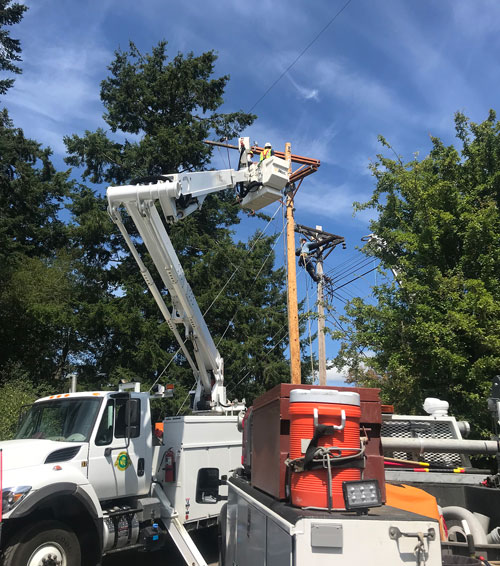 Orcas Power & Light Cooperative (OPALCO) is our member-owned cooperative electric utility, serving more than 11,400 members on 20 islands in San Juan County. OPALCO provides electricity that is 97% greenhouse-gas free and is generated predominantly by hydroelectric plants. OPALCO was founded in 1937. Follow OPALCO @OrcasPower on Facebook and Twitter.

Photos: Crews at work on San Juan Valley Road Hot arms in place to keep energized lines away from the work area. OPALCO linemen have specialized skills to work hot – with live lines. Crew building out a key corner with extra-strength cross arms and guy wires. OPALCO crew working on the pole top.