A combination of lack of resources in the Assessor's office, an unforwarded email and a desire to keep forested land taxed as farm land resulted in confusion at the BOE hearing February 17, 2014.

posted 09/20/2010 - A couple living in Santa Barbara County California, Langdon Quetin and and Robin Ross-Quetin dream of retiring on the 25 acres they own on Lopez Island. The market rate value of the property is $357,560. The couple pay taxes on the property, half of which is forested, as though it was worth $11,580. Why? Because it's enrolled in the county's Farm/Ag Current Use program.

The legislature hereby declares that it is in the best interest of the state to maintain, preserve, conserve and otherwise continue in existence adequate open space lands for the production of food, fiber and forest crops, and to assure the use and enjoyment of natural resources and scenic beauty for the economic and social well-being of the state and its citizens.

The first of the 17 properties that are included in the applications kept on hold at the request of the County Council since 2008 came before them Tuesday, October 27, 2010.

The applications are from property owners who are receiving property tax breaks because they are enrolled in the Current Use Farm/Agriculture program even though they do not meet the requirements - they are actively involved in commercial agricultural activity.

When an uproar ensued after County Assessor Charles Zalmanek sent letters to the property owners asking for verification of agricultural activity, the council stepped in.

A decision was made by the council to revise the public benefit rating system for the county's Current Use Farm/Agricultural Conservation program. The currrent rating system "virtually" does not give enough points for properties to qualify, according to a report to the council from county Deputy Civil Prosecutor Karen Vedder. The Council instructed the Community Development and Planning Department not to process the applications until the new rules were adopted.

The program gives property owners tax breaks for owning property which might at some future time be farmed. They are not required to actually use the property for agriculture while they receive the tax break.

The 17 property owners applied for the program. Once they applied the Assessor could not go after them for back taxes and penalties for violating the other program.

When contacted by San Juan Islander in June, State Department of Revenue Current Use Supervisor Leslie Mullin said the county should have processed the applications right away. In a later conversation, she said the county is right to wait until the benefit system is workable.

On Tuesday, Oct. 26, 2010, the most complicated application - the Quetin's - came before the council. The Quetin application is in two parts. They asked to take 13 of their 25 acres and move it into Current Use Timber. The other 12 acres will be transferred to the Farm/Ag Conservation program.

Their past egregious action of having received an agricultural tax break for forested acres caused Council member Rich Peterson to refer to the application as a "Poster Child" for the abuse of the program.

While noting the application was complete, he asked to have the hearing continued until the following week in order to determine if there is any legal way to not approve it. The continued public hearing is set for 10:45 a.m. November 2, 2010 in the legislative hearing room.

The other half of the Quetin's property along with the 16 other properties - all have applications for Current Use Farm/Ag Conservation Land pending since 2008 - will continue to receive 90 percent tax breaks until their applications are processed. They remain enrolled in the Current Use Farm/Ag program while the county revises its Conservation Public Benefit Rating System.

If they are successfully transferred to the other Current Use program they avoid up to seven years of back taxes with 12% interest and a 20% penalty. Any property owner, whose property doesn't qualify to transfer, will have to pay.

posted 12/16/2009
San Juan County has the lowest property tax rates in the state. Some property owners pay even lower rates - some legitimately. Others slip through wide cracks in the county's Open Space programs leaving other taxpayers to make up the difference.

How much of the approximately $886,578 in one program alone shouldn't be shifted to other taxpayers is unknown due lack of monitoring.

The county has four Current Use Programs and plans to add a fifth. To enroll in the Designated Forest Land and Current Use Farm and Agricultural program, a property owner contacts the county Assessor's Office. A fee is paid, a forestry plan or proof of actively farming is required. The property is then assessed at current use value rather than market value. Property taxes are lower. How much lower depends on how much of the property is involved in the program.

Monitoring to make sure participants are meeting the requirements to remain in the program are virtually non-existent. Even county Councilmember Gene Knapp has been in the program for years although he hasn't been actively farming. Asked why he didn't leave the program as required, he said, "I forgot."

These are tax-deferral programs. Once the activity (farming, timber harvesting) stops, the property owner must pay notify the Assessor's office within 60 days and pay back taxes for up to the past seven years, 12 percent interest and a 20 percent penalty.

Timber Land Open Space and Open Open Space programs are administered through the Community Planning and Development Department. The difference between Timber Land and DFL is the amount of acreage required to join the program.

The Current Use Open Space program gives property owners points for such things as scenic value, view, natural resources, closeness to historic points of interest. If the Open Space Advisory Team (this committee is different from the one mentioned above) determines the score reaches the 30 point threshold to enter the program, the application receives a public hearing before the county Planning Commission and then the county Council. The tax break is a percentage depending on the score received.

The public benefit of the property owner managing their own property to preserve the values which rated the points is considered the trade-off for the tax break.

The county Council debated raising the fee to apply for the two programs administered by the CDP Dept. in order to cover the cost of providing the service. The council requires all other permits to cover the costs. Councilmembers Lovel Pratt, Bob Myhr, Howie Rosenfeld and Gene Knapp voted not to raise the fees. They remain at $1,330. The cost to process the application is $4,500.

The Assessor charges $330 for the application for the Farm Ag and DFL programs. When Assessor Charles Zalmanek took office in 2007 he asked state auditors to review the departments practices. They determined the Open Space programs were not being monitored properly. In an interview last week, Zalmanek said the council has not provided enough in his department's budget to do the job.

This week, in the wake of an Attorney General’s opinion, the first of dozens of notices will go out to owners of properties in San Juan County which have been benefiting from a tax break for which they do not appear to qualify.

SEATTLE — The Coast Guard came to the aid of a distressed sailor just north of Port Townsend Saturday.

Petty Officer Third Class Travis Obendorf died in a Seattle hospital Dec. 18 as a result of injuries he sustained during search and rescue operations near Amak Island, Alaska, Nov. 11, while serving aboard Coast Guard Cutter Waesche. 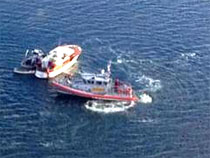 A canoe carrying nine people participating in the 2013 Intertribal Canoe Journey-Paddle to Quinalt overturned near Admiralty Bay this morning. One of the victims used a cell phone to call for help.