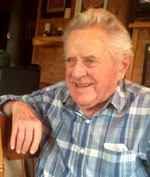 Nathan Dow Benedict was born 1922 in Lancaster, California to Edgar Ells Benedict and Bertha Alling Benedict. He had one brother Edgar Jr., seven years his senior.

The family moved to the Los Angeles area in 1923 and lived in Inglewood, Hollywood, Los Angeles and finally South Pasadena in 1930, where he spent most of his youth. There he attended grammar school, junior high, and one year of high school. He then attended New Mexico Military Institute in Roswell for two years and finally graduated from University High School in Pasadena in 1940. He attended Pomona College for one semester then tempted by all the war jobs left to train for and become a machinist and subsequently a tool and die maker.

He married Mary Catherine Sharples in 1941. They produced three children, Antoinette, Nathan Jr. and Philip. He went into the Navy in 1944 and served in the Atlantic Theater, the pacific theater and the China-Burma-India theater. After his first marriage ended in 1950, he was called back into the Navy for the Korean conflict. His final discharge was in 1956.

He married Helen Griffin in 1951 after moving to the San Francisco area. Helen had two children from a previous marriage, Carol and Michael, who Nate subsequently adopted. Later in the 1950s, he and Helen produced two more children, Scott and Elizabeth. Meanwhile in 1951, he went to work in the shops of the Institute of Engineering for the University of California at Berkeley, which he became head of in 1955. Also in 1955, he transferred to the Lawrence Radiation Laboratory in Livermore. Nate was a very quick study and a very motivated individual. He went into the Lab in 1955 as a Mechanical Technician, was sent over to Berkeley halfway through his career to take, and pass, the engineering exam (with no classroom time). Almost his entire career at the lab was spent in the Weapons Engineering division. He was active in the engineering portion of weapons design, also participating in many nuclear tests, both in the Pacific and in Nevada. He was a prime responder to nuclear accidents wherever they occurred, and was even part of the team on the Glomar Explorer which investigated a nuclear accident involving a Russian submarine. He retired in 1976 with the title of Nuclear Weapons Design Engineer.

While in Livermore, he became involved with flying sailplanes, then power planes. He logged over 600 hours in power planes, with almost all of them flying the tow plane for the Ames Soaring Club, leading to a log of real stick and rudder flying in a Piper Super Cub, He purchased a Piper J-3 Cub and restored it for relaxed flying. In 1972, after surviving a midair collision in a sailplane, he was motivated to return to one of his first loves, boating. He bought an old 28’ Monterey fish boat, then a Willard 30.

The list of activities Nate loved during his life in California and later Friday harbor is long. The short list is: The desert, camping, Baja California, Ham radio, music (he played piano well and did play in a small group), bird hunting and sport fishing. He was an avid reader, historian, gardener, crossword puzzle wizard, sailor, writer, Scrabble player, photographer and sharpshooter.

He and Helen moved to Friday Harbor in 1976, where they built Helen’s dream house. He sold the Willard 30 that he had run up the coast, and purchased a converted Canadian commercial fish boat, the “Liz B” in which he cruised the waters of British Columbia and Puget Sound for 25 years. Nate was a member of the yacht club and later the sailing club.

Nate joined and became active in St. Francis Parish. He was ordained Permanent Deacon in 1982 and was active in the ministry from then on. He was active in the startup of the San Juan Island Hospice and participated in its activities for many years.

Too many birthdays made boating a little difficult, and so the Liz B was sold and shortly after in 2010, Helen suffered a debilitating stroke. Helen his loving wife of 62 years left us all in 2013 shortly after her 95th birthday. Nate was wonderfully assisted in those three years and was extremely grateful to Stacy Hoban, Kim Levasheff, Julie Ross, Rikki Guiboa, Michel Lucian and Lutie Park.

Nate sold their dream house and moved into his son Scott’s guest cabin where he spent his remaining years close to family on island and still driving himself regularly to church, the post office, Vinny’s, Shipyard Cove, etc. right up to the end.

A funeral service is planned for 12:00 Noon April 29th at St. Francis Catholic Parish, with reception to follow at 2:00 downstairs at the American Legion. In lieu of flowers the family asks that donations be given in Nate's name to San Juan Island Hospice or San Juan E.M.S.