Jannik Svend von Rosenvinge was born on April 12, 1946, and grew up in Rockport, Massachusetts. Third of six children, Jannik, or "Nik" as he was soon dubbed, was born to Deborah and Norman von Rosenvinge. Nik graduated from Hebron Academy and went on to attend Dartmouth College. 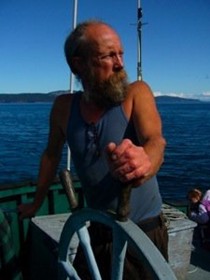 As a young man Nik refused the military draft due to staunch moral opposition to the Vietnam War. Instead he served in the federal Vista program and found himself sent to Arctic Village, Alaska, a small town north of the Arctic Circle. Nik remained in Alaska for two years, years that he counted among the most important of his life. In Alaska Nik learned the Athabascan Native traditions and way of life, hunting and trapping to survive in the short bright Arctic days.

Following his time in Arctic Village, Nik worked on a salmon seiner in Alaska and the Pacific Northwest. He worked on farms and as a logger, and discovered the San Juan Islands, coming to appreciate isolated Waldron Island in particular.

Nik eventually returned to Gloucester, where he worked for several years fishing for swordfish and mackerel, and dragging for lobster and ground fish in the North Atlantic. Later Nik began a business as a rigger. "Nik the Rigger" drove two large red moving trucks, well known in the Gloucester streets and farther abroad.

Over the years, Nik made a name for himself in the rigging business by ingeniously meeting the unique challenges of transporting various items, running the gamut from heavy machinery to sculptures.

Soon after he began a family in Gloucester, Nik purchased a small fish tendering boat, the F.V. Beaver, to work in the Washington salmon industry. Over the next few years he tendered salmon in Puget Sound, and in 1993, Nik and his family moved west permanently and settled on Waldron Island.

Later Nik bought a larger salmon tender, the F.V. Caleb Haley, and continued to work in the salmon industry for nearly the next twenty years, also making forays up to Alaskan waters.

When Nik wasn't fishing he traveled extensively, visiting old friends and making new ones. In the off-season he smoked salmon in the traditional method and loved sharing it with friends and family. Jannik also pursued woodcarving, crafting bows, bowls and sculptures inspired by the natural world.

He was an avid reader and an aspiring musician. Throughout his life Nik remained passionate about natural science, and dedicated to educating children about its intricacies and wonders. In his last months Nik enjoyed reading aloud to children at Waldron's one room schoolhouse, and was still collecting feathers and butterflies. Nik spent the end of his life at the home he built on Waldron Island in the company of his friends and family.

Jannik is survived by his wife Janice Lyons; his children Thorkild Rosenvinge and Annika Rosenvinge; brothers Tycho, Christian, and Steffen von Rosenvinge; and sisters Trina Sobotka and Deborah von Rosenvinge, as well as many dear friends on both coasts and beyond.

A memorial service will be held in the spring with the details to be announced.