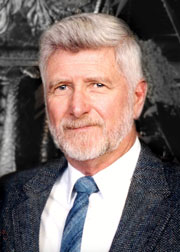 Wilson R Lorentz, a 48-year resident of San Juan Island, passed away on March 25, 2019 at the age of 80, after a six year struggle with Alzheimer’s disease.

Wilson is survived by his wife and partner of 28 years, Mitzi Stack, his daughter Shirley of Forks, his son Thomas and two grandchildren, Kyle and Tami of California.

Wil will be remembered for his 22 years as Head Ranger of San Juan Islands State Parks, residing at Lime Kiln Lighthouse State Park until he retired in 1991, after which he and Mitzi moved into their home on Little Mountain.

Wilson was born and lived in New Jersey until he graduated from high school, then went on to graduate from Ursinus College in Pennsylvania. After college he joined the Navy as an officer for three years, mostly serving in Iceland. He married his wife Susan and when Shirley was an infant, they left the East Coast and headed west to live in Seattle, at that time working as an insurance adjuster.

When he saw an ad for a State Parks ranger, he realized what he wanted to do and started his career at Deception Pass State Park. Son Tom was born, and an opportunity arose as Head Ranger of the San Juan State Parks, so he happily moved to San Juan Island where he lived until his illness made it necessary to move off the island. He and Susan had divorced after a few years on San Juan.

When he retired, he and Mitzi travelled extensively, around the states by car, going on many Elderhostels in the US and Canada and on several cruises. He especially enjoyed a cruise from Boston, up the Canadian coast and on to Scotland and Iceland again, then a Canadian Railroad trip across the continent and trips to Scotland, Alaska and Hawaii.

He liked spending time at the Mullis Senior Center and drove for them for about eight years. He loved being on San Juan Island and his home and neighbors there.