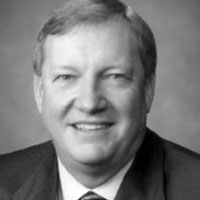 Sherm Losee passed away surrounded by his loving family. He was 66.

Sherm was born on July 13, 1952 in Granger, Utah to his parents, Sherman Grant and Irene Mary Funk Losee. He graduated from the University of Utah – Finance BS ’74. He married Christine Marie Schonian in 1975, whom he met when they were both young bankers. She was the love of his life and his trusted compass.

Sherm worked in the banking industry his entire life, always community banks, as a small business lender and credit administrator. The Losee family moved from Salt Lake City to Yakima, Washington where they lived for 20 years. Sherm continued his banking training at the Pacific Coast Banking School and the National Commercial Lending Graduate School. He then moved back to Utah and managed the Northern Utah region for a large regional bank for 11 years.

After his time in Utah, Sherm returned to Washington to be near his children and grandchildren; and spent seven years sharing his talents with a community bank in the San Juan Islands.

Sherm was very involved in the community wherever he lived, serving on local non-profit boards in the arts, business and social services areas. His board positions are too numerous to list. His leadership and positive impact will be remembered in many communities.

Sherm is survived by his wife, Chris and his two sons: Steven (Lori Lyman) Losee, James (Kathryn Flitcraft) Losee and four grandchildren: Grant, Jackson, Finnegan and Juniper. He is also survived by a brother, Jeffery (Janet Hubbard) Losee and a sister Pamela Losee Christian. He enjoyed a special relationship with Chris’ siblings: Jim and Jane Schonian.

He was preceded in death by his parents.

In lieu of flowers, please donate to the charity of your choice.