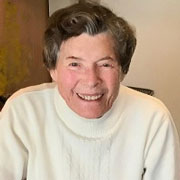 Irene Sina (Brudie) Fisher died at home on Orcas Island on June 8, 2019. She was born on August 19, 1926, the daughter of Sigurd and Ingerid (Jensen) Brudie in Seattle-WA. Irene attended schools in Kirkland and graduated from the University of Washington and was a registered nurse with Swedish Hospital.

She married the love of her life, David M. Fisher in 1950. They resided in Queen Anne Hill and later in Japan, Indonesia and Belgium before retiring to Orcas Island in the NW.

Irene is preceded in death by her parents and sisters: Alice Wright and Esther MacGregor.

She is survived by her husband of 68 years: Dave; sons: David B (Ann-Margreth), Erik (Nowell King), Peter and grandsons: Alek and Will. Private Family Services will be held, and remembrances are suggested to your preferred charities.