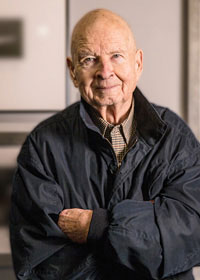 Rod spent his life on or near the water. He was born in Germany and spent his early years near the Weser River. His family immigrated to Lake Geneva, Wisconsin where he learned to love boats and to hunt, fish, and dive. He was the youngest SCUBA diver on the lake.

Rod joined the marines and was introduced to the Pacific, serving in Okinawa and Camp Pendleton. Following his service, Rod returned to Europe, living in Italy and Greece. Two years later he left for Australia, where he worked as a diver on a massive construction project at Northwest Cape, Western Australia. A year later, Rod crewed on a sailboat sailing clockwise around the top of Australia.

Though he embraced the cruising life, he returned to the U.S. to build a boat and to finish his education. He spent years boatbuilding, cruising, and sailing.

He also visited Baja California, Mexico, fell in love with the region and lived in Bahia de Los Angeles for several years.

Rod and his partner Barbara Cox settled in Friday Harbor in 2001 where he consolidated his writing, some of which was published by Sail and Cruising World. His books include Baja Dreaming - Stories from Another Time and Seventeen Stories...and more.

He is survived by his partner of 35 years, Barbara, his sister Regina Pritchard, nephew Mark Tippins (Judy) and family in Germany.

A celebration of life will take place at a future date in the fall.

In lieu of flowers please donate to:

Hospice of the Northwest