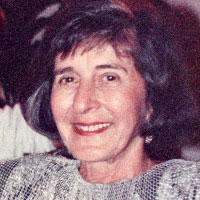 Barbara Joan Buck, 97, passed away June 14th at her home in Friday Harbor with her son at her side. Born April 27th, 1923 in Alberta, Canada, she is the daughter of Edward and Ruth (Lovel) Carlson. She and her beloved sister, Nan, were raised by their grandmother in San Pedro, California. Upon graduation from high school in 1940, the family moved to Bellevue, Washington.

Barbara's first job was with the Renton News Record. Later she was secretary, office manager and printing broker for the Douglas Fir Plywood Association. During those years she was married to Dennis Boreen, living in Medina Washington with their son, Jay, and her great aunt, Betty Beeson.

In 1958 she purchased a failing magazine, the Pacific Banker and Business, and set about turning it into a thriving contemporary financial publication. In the mid '60s she purchased a three story triangular building at 1 Yesler Way in Pioneer Square. A former flop house, she restored it as the headquarters of her magazine.

Always on the vanguard, this was only the second building restoration in what would become bustling Pioneer Square. Representing that area, she was elected to the board of the Seattle Chamber of Commerce, serving several terms, at least two of those as vice president. She was on the board of innumerable businesses, foundations and organizations, including Pacific First Federal, MOHI, Seafair, Seattle Landmarks Preservation, Advisory Board of the State Department of Commerce and Economic Development, Muni League, Seattle YWCA and Virginia Mason Foundation's Women's Advisory Group. She was a member of San Juan Community Theatre's CATS, Seattle Yacht Club, Washington Athletic Club and the Rainier Club.

Barbara was the epitome of a self-made woman. She was a mentor to numerous younger women encouraging them to succeed in the Seattle business community. Beautiful, talented, hard-working and generous with her time, she was an inspiration to many.

Barbara married Robert F. Buck in 1962. They built a home on Mercer Island and later resided in condos in Seattle. They travelled extensively, both for business and pleasure. Eventually they retired to Kwan Lamah, San Juan Island, the old resort they had been diligently restoring for years. Summers featured sailing north to Desolation Sound, often joined by Bob's brother Sam and his wife Barbara.

She is missed and survived by her son, Jay Boreen, and his son's Jayson, Kelsey and Quin, step-son Aaron Beyers, and Jayson's daughters Madrona and Sailor, and by Robert Buck's children, Carolyn Norman, Vincent Buck and their children Mikal Norman, Laura Sandstrom, Erika Norman and Fiona Buck, and great-grandchildren, Delaney, Antonia and Nikolai Norman and Shaw Sandstrom.