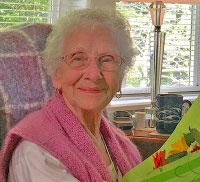 Letitia Sophia Boyce passed away peacefully on June 13, 2019. Her family was at her side. Tish was born on May 13, 1927 in Prince George, B.C., Canada to Mabel & William Boyce. She was the oldest of three siblings.

She grew up in British Columbia, moving from Prince George to the towns of Hedley and Anyox - both mining towns in her youth. As a young woman, she lived and worked in Victoria, B.C. She once worked at a radio station, a job she loved and talked often about.

She married in Victoria and had her only child, Diana in 1952. In 1958, Tish moved to Seattle with her daughter to start a new life.

There she spent her next 40 years living and working. She worked in the surplus lines insurance industry as a claims adjustor staying with the same company through several name changes until she retired in the early 90s. She hired on at Adjustco in 1960 and in 1962 she took the Independent Adjustors Exam to receive her license. She was one of the first woman claims adjustors in Washington State. Tish loved her work and was well respected within the insurance community.

Tish moved from Seattle to Lopez Island in the late 90s to be closer to her daughter and family. There she bought her first home and happily settled into island life where she spent many hours with her grandchildren, volunteered at the Library, joined the birthday club and enjoyed her retirement years.

Tish had many wonderful talents. Early on, she was a talented artist and accomplished seamstress, sewing several wedding dresses including her daughter’s. She made many clothes for her grandchildren and friends’ children as well. Crochet and knitting were also hobbies of hers and she made many amazing afghans and clothing items. In recent years she made and donated newborn caps to St. Joseph’s Hospital for their new moms’ infants. She also loved to cook for her family and there were many family favorites.

Tish met life head on with a determination to do well, succeed at work, live independently and enjoy her family. She was known to pass out hugs freely, recite the alphabet backwards, touch her toes and “kibitz” as she called it with everyone.

She is survived by her daughter, Diana, her daughter’s husband Larry; two grandchildren: Sara and Tyler and Sara’s husband, Justin; two brothers: Harry & Chuck Boyce and their families.

A Celebration of Tish’s life will be held on Lopez Island in late August.