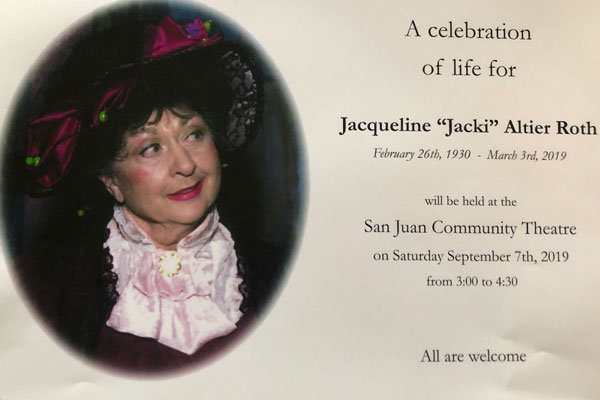 A celebration of life for Jacqueline "Jacki" Altier Roth will be held from 3 to 4:30 p.m. Saturday, September 7, 2019 at San Juan Community Theatre. Everyone is welcome to attend. 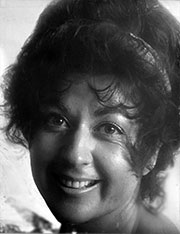 Jacki often said, “I’ve had a great life,” and in fact she did. She was a fierce friend, a devoted mom and an adoring wife. She had an amazing sense of humor and simply loved to laugh. She was also a voracious reader, an excellent writer and a great storyteller with many wonderful stories to share. Her family and friends will deeply miss her presence in their lives.

Jacki was born in Chicago on Feb. 26, 1930, the only child of Daniel and Lillian (Serena) Altier. From the time she began walking and talking, she wanted to be an actress and a singer. She had her stage debut when she was a young girl — performing at the well-known Hull House, a settlement house in Chicago that was co-founded by Jane Adams. Soon Jacki’s family moved to Los Angeles, where her father went to work for the railroad. In 1948, she graduated from John Marshall High School, having been very active in the theater and music department.

After graduation, Jacki went to work in public relations for CBS; then in 1951, she was hired by the Hormel meat-packing company as one of their “Hormel Girls” — an all-female band that traveled around the country promoting Hormel’s products (primarily Spam). Wearing elaborate costumes, the group played big band music, sang and danced for the locals as well as the grocers and even did radio. And in 1952, she participated in two USO tours in Alaska with Raymond Burr, an experience she always cherished.

Although Jacki’s first love was opera, she went on to work the night club circuit in Los Angeles, singing jazz. It was during this time that she met Fred Katz, a cellist and composer, who would become her mentor and lifelong friend. They joined up with lyricist Jacques Wilson to record The Jazz Opera, which included a song called “Pretty Things.” It has been said that no one can listen to the original recording of this song, with Jacki singing and Fred playing the piano, and not be moved to tears.

Jacki moved on to become a postproduction secretary at CBS, where she helped to organize the Office Employees Union. While working there, she met and married film editor David Berlatsky. Many interesting career opportunities came her way, including an offer from Rodgers and Hammerstein that might have made her a big star. But Jacki chose instead to leave the world of work in order to be a full-time mother to son Derek and daughter Andrea — a decision she never regretted. In her spare time, she was proud to be one of the founding members of California’s Peace and Freedom Party.

Eventually, Jacki’s marriage to David ended. In 1975, when she was buying bagels at the local deli, the man behind the counter that helped her (and flirted with her and made her laugh!) was Arlen Roth, who would become the love of her life. Jacki and Arlen soon merged their families, and Jacki went back to work at Paramount Studios as a secretary for Stephen J. Cannell Productions.

Because she found herself longing to sing again, Jacki decided to form a jazz trio with several of the finest musicians she could find, playing primarily at small jazz clubs around Los Angeles. Then a wonderful opportunity came her way to perform and act in a musical called “Club Indigo” at a community theater in Burbank, California. She jumped on the offer, and was absolutely in her glory when the theater was packed every single night of the play’s run.

Jacki wrote the lyrics to a musical that unfortunately never got off the ground, but her family feels very blessed to be left with that legacy. She and her collaborator from that musical would go on to write the song “It’s Good to Live in L.A.” that would become one of the last songs ever recorded by Dean Martin.

Arlen and Jacki traveled to Washington and fell in love with the San Juan Islands. In 1997 they moved to Friday Harbor to begin a new chapter in their life together. Arlen became the deli manager at Kings Market, and Jacki found herself getting involved with the San Juan Community Theatre. She performed in several productions before getting the starring role in the musical “Hello, Dolly,” and was very proud to appear two different times in one-woman shows that included some of her original songs along with well-known standards. It filled her heart to the brim when these concerts were received very enthusiastically by the island community that she loved so dearly.

Jacki had a saying she loved: “Catch the joy as it passes.” And she did.