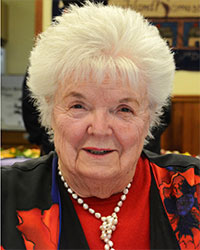 Friends describe Eleanor with many of the same words: intelligent, stubborn, curious, funny, loyal, generous, independent and strong. As Lori Brow, Eleanor’s Friday Harbor hairdresser for 30-some years said: “Eleanor didn’t just get old. She never stopped learning. She was strong and intelligent and a force to be reckoned with.”

Eleanor was born May 15, 1928, in the tiny eastern Washington town or Rosalia, “The Gateway to the Palouse,” to to Howard and Francis Riley. Having outlived most family and early friends, there are gaps in her life story, but sometime in the 1950s she married Vic Bartig on San Juan Island and opened Needlework Boutique, her knitting and needlework store in a little while house at 265 Spring Street. There she taught many islanders — including one blind woman — to knit and do needlework, both of which she did with imagination and great skill.

She and Vic moved to the west side of Shaw around 1960, and Eleanor commuted daily in a small boat to Friday Harbor and her business. Vic would row her out to her boat in the morning, and back again in the evening to bring her to shore. She later rode the ferry, becoming so popular with the crew that she would frequently be invited to breakfast with them in the engine room.

Lola Deane, a longtime Shaw resident and friend, said she met Eleanor before she and her husband, Phil, moved to Shaw in 1986. “She had yarn, I had needs,” Lola said of their first meeting. Later, when she and Phil were on a medical mission in American Samoa and she would run out of a particular thread for a needlepoint project, she’d write Eleanor and the thread would arrive post-haste.

“Eleanor was a woman of strong convictions,” Lola said, “but she never infringed on anyone else’s convictions.” Politically, Eleanor’s views were very conservative (naturally, elephants were a favorite needlepoint subject) and she never backed down from them in one of the most politically liberal counties in the state. After researching her family history late in life, she became a proud member of the Daughters of the American Revolution.

David Schulz and Al Sandin, Shaw neighbors of Eleanor’s, told about wanting to go to a Patsy Cline concert in Friday Harbor only to find it was sold out. They mentioned their disappointment one day to the Shaw postmaster. Two days later, they got a call from Eleanor, who they hadn’t yet met, saying she had two extra tickets and did they want to go with her. They did, and that began a very close friendship that lasted until Eleanor moved to Anacortes in January, 2018.

For years Eleanor attended Richard Fadem’s literature classes on Shaw and Gabriel Jacob’s french classes. Gabriel, a year younger than Eleanor, said Eleanor bestowed “eternal youth” on him by always greeting him as “my dear boy.”

One of her more unusual life credits was serving as Anne Bancroft’s “body double” in the 1965 movie “The Slender Thread,” which was partly filmed in Seattle. She can be seen, from the back, standing on the Aurora Bridge, apparently something Bancroft didn’t want to do.

Two year’s later, Bancroft achieved great notoriety as the movie seductress Mrs. Robinson in “The Graduate.” There is no record of Eleanor having served as her “body double” in that movie.