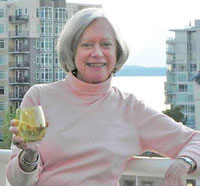 Sandra Kersten Chalk, “Sandy,” died at her home in Friday Harbor, WA on Friday evening, September 6 after a sudden and brief struggle with cancer. The night of her death was calm, warm and dry and filled with stars and the lights of the Milky Way and the following evening, Seattle experienced the most severe thunderstorm in recent memory - she rode out on the winds of a wild cold front.

Sandy was born in Pittsburg, Pennsylvania on January 3, 1938. After attending college at Boston University, she relocated to New York City for a career in theater. In the mid-1960’s she met Rodney Chalk and joined him in the operation of their successful film production company, which specialized in features about food and travel. Sandra and Rodney produced films for major corporations including Pan Am, Corning Glass, Campbell's Soup, Knox Gelatin, and the Mexican government among others.

In the early ’70s, Rodney and Sandra were married and the Chalks relocated to Stonington, CT where they blended in a new addition to their film crew, their beloved son Dylan. For many years, Rodney, Sandra, and Dylan traveled the world making films together. Some of their favorite places were Baja, Mexico; Patagonia, Iran; Hana, Maui; and Paris, France. You can see one of their films, “Holiday on The Sea of Cortez,” here. https://www.youtube.com/watch?v=2JPFyF6r8m0&t=571s

In 1992, the Chalks moved from Mystic to Starr Street in New London where Sandy became a wonderful neighbor and community leader. She will be well-remembered in the city as the long-time Executive Director of New London Landmarks, where she was instrumental in establishing new programs, raising visibility for the organization, and initiating long-range planning for this important preservation group. While in New London, she also blossomed as a writer and published historical books for some Westerly Rhode Island institutions, one for the Washington Bank and another for the Weekapaug Inn.

After Rodney’s death in 2012, Sandy bid farewell to the city she loved and moved to Seattle to enjoy the affection and adventure of being near Dylan, his wife Margot, and their twin sons, Riley and Jaco, who were the light of her life. In Seattle, true to form, she walked everywhere. explored her new city with passion and became involved in several local organizations, including the local film-making scene. She continued her work in literature by helping her son and a new-friend publish successful books. She spent as much time as she could with her beloved grandsons and was able to take in music recitals, soccer matches, baseball games and all sorts of holidays and other family adventures. Most recently, she relocated to Friday Harbor in the beautiful San Juan Islands, joining her new best friend in life, Tom Munsey.

Her son Dylan reminds us that “Mom loved fresh air, night skies, provocative books, fresh food, a great conversation, her family, adventure and travel. She always wanted to live where the mountains meet the sea and she spent her last days in the stunning beauty of the San Juan Islands.” Sandy’s life was full of joy, friendship, travel, family and community engagement wherever she lived. She was passionate about advocating for social and environmental justice as well as historic preservation and she was as generous a person as you could ever hope to meet. Sandy worked hard; she was a superb writer and photographer, well-read, a fabulous host of intimate dinner parties and she would choose the most thoughtful gifts for those she loved. Sandy brought out the best in all who knew her. She will be missed, but always remembered with fondness by her family, friends, co-workers, and neighbors in Washington State and Southeastern Connecticut.