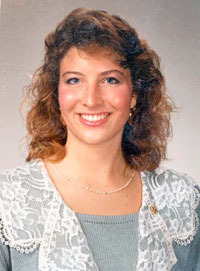 Elizabeth Jean Bell, of Friday Harbor, Washington, unexpectedly passed away September 8, 2019 at the age of 51. She was preceded in death by her grandparents Ralph and Elizabeth Smith of Los Altos, California, and John and Jean Bell of Friday Harbor, Washington. Elizabeth is survived by her parents, Jack and Sherry Bell, her sister Christina Bell Jacobs, and Christina's husband Paul. Her relatives include aunts and uncles Margaret and Conrad Berthold, Mark and Jane Bell, and Scott and Kim Bell. Her cousins are Fabiola Bell, Jon Lawrence, Thalya Harvey, Audrey Dolson, Paul Espinoza, Jacob Seiler, and Cady Mountain Seiler.

Elizabeth was born in Palo Alto in 1968. She grew up in Los Altos, California, Warren, New Jersey and Lafayette, California, where she graduated from Acalanes High School. Elizabeth attended UC Santa Barbara where she was as a member of Alpha Phi Sorority. She graduated with a degree in Humanities from New College of California. She earned a certificate in Early Childhood Education from Diablo Valley College in Pleasant Hill.

Elizabeth cared deeply about children. She worked for Coleman's Advocates for Children, San Francisco, Richmond County Child Care, and AmeriCorps National Service Program, Oakland, California. While living in Chico, California, she worked for the U.S. Census of 2000 and Network Mortgage. She volunteered as a board member of Chico Natural Foods Cooperative.

As a member of the Young Democrats, she advocated for environmental conservation and social justice. She found community in Buddhism and Sufism. She enjoyed many summers on San Juan Island, camping and swimming in the pond.

A Memorial will be held in Friday Harbor the summer of 2020. Donations in Elizabeth's name can be given to the Family Resource Center of Friday Harbor.