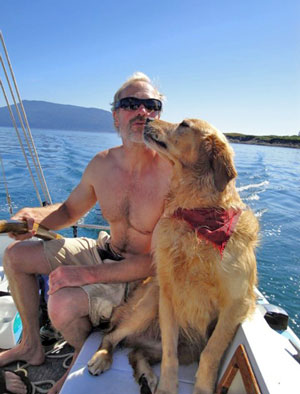 Thomas “TomT” Tellefsen, 60, passed away peacefully on August 14, 2019 at his home on beautiful Orcas Island. He was born on October 14, 1958 in Seattle, Washington. He was the youngest of two children to Henry “Hank” and Millicent “Milli” Tellefsen. Tom was raised in Ferndale, WA, but spent much of his time, until permanently relocating, on Orcas Island.

Tom enjoyed the outdoors, boating, spending time with his family and building projects that would benefit the greater good of his family and the close-knit neighborhood community that he embraced as extended loved ones.

Tom was married to his first wife, Lucia, with whom he had two daughters with, Randi and Lindsey, and to his second wife, Shila.

Tom loved his girls so much, he made sure he spent equal time and opportunity with each of them. He did his best to pass along his knowledge to both, catering and playing to their individual strengths, setting them up to help support each other. He left knowing his family will grow strong together, love each other and teach his legacy to future generations. Tom took pride in working on the Orcas property, always trying to better the functionality of each structure or project he created.

Tom was preceded in death by his wonderful and loving parents, Hank and Milli. He is survived by his loving his daughters: Randi and her son Odin and Lindsey and her husband Andrew along with his newborn granddaughter Emma; his sister: Patti; his cousin-brother: Brian, cousins: Kristi and Jim, along with many more cousins, nieces and nephews.

The family wishes to thank all of those who supported, visited, called and texted Tom to uplift his spirits while he was struggling and suffering during his extended illness.

“TomT” was a remarkable man and will be immensely missed.