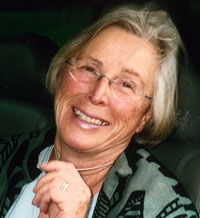 Thelma Palmer-Lumina was born to Alfred and Lily Jorgensen, February 10th, 1927 at Lake Campbell, Fidalgo Island, Washington. She grew up at Lake Campbell and attended local schools. Thelma married Darrell Wayne Palmer in 1941, and they remained in Anacortes to raise their two sons, Dennis Wayne Palmer and Bradley Jorgen Palmer. Later she earned a BA in English, a BA in Education, and a Masters in Creative Writing from Western Washington University.

Thelma taught English at Anacortes High School for 20 years, from 1963 to 1983. There, she also headed the People to People International program, taking groups of students to various European countries. With fellow teacher Anne McCracken, Thelma started a travel program to take students to the Ashland Shakespeare Festival. “Ann and I plot away and scheme up trouble for those kids all the time,” Thelma wrote in a letter to her brother in 1973. Thelma was a beloved and courageous teacher and was reprimanded on several occasions for teaching banned books such as Catcher in the Rye.

Thelma and Darrell moved from Anacortes to Guemes Island in the early 1980s, and Thelma took the ferry in to work each day until she retired early from teaching in order to embark in earnest on her career as a poet and writer. With her friend and editor Delphine Haley, she started Island Publishers to produce her first book of poetry, The Sacred Round, in 1985. They later published A Guide to Marine Mammals of the Greater Puget Sound, San Juan Classics Cookbook, and others. Thelma also wrote Enchantment of the World: France with Peter Moss, Long Journey to the Rose Garden with John Tursi, and High White Moon: Poems from Three Islands: Guemes, Fidalgo, and Honshu.

In addition to continuing to write and give public poetry readings, Thelma also became a certified hypnotherapist, and provided help to many both on Guemes and in Anacortes into the 1990s. She was deeply engaged in the Guemes community, including as a founding member of the Guemes Island poetry group, and her beautiful and bountiful gardens were a delight to her, and to her family and friends.

After Darrell’s death in 1994, Thelma remained on Guemes Island. In 2001 she met and married Luke Anthony Lumina, and in 2004 they left Guemes to return to the Jorgensen family property on Lake Campbell, along with her son Dennis. Luke preceded her in death in July of this year, and Dennis cared lovingly for them both.

Thelma died at her home at Lake Campbell on September 22, 2019, at the age of 92. She is survived by her two sons: Dennis and Bradley Palmer; grandsons: Evan and Austin Palmer, an extended family of nieces, nephews, and cousins, her adopted Japanese daughter Izumi, and her beloved dog Rumi.

Nothing would have pleased Thelma more than to have her obituary close with one of her poems, written for her dear friend from her teaching and Guemes Island days, Anne McCracken:

We have been friends for thirty years,

through happiness and sadness over husbands,

through grief at sickness and at death;

through joy in books and gardens;

that kept receding into next spring

next fall, next Christmas.

Perhaps we can say, truly,

that the journey was more important

than the never getting there.

Perhaps we can say just as truly

that we have not journeyed, at all,

but have always been rooted, here,

in the heart of that for which we searched.