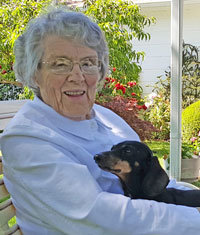 Family and friends mourn the loss of Irene (Renie) Taylor Vandersluys who passed September 21, just months before her 100th birthday. She was a 96-year resident of San Juan County. Her parents immigrated from England to join family in Canada. Irene was born in Keeler on the prairies of Saskatchewan on November 15, 1919. She was brought to San Juan County at age 2 by her parents who came as caretakers for Crane Island in 1922. Irene and her sister Edna rowed across Pole Pass, often dodging orca whales, to catch the school bus at Deer Harbor. She graduated from Orcas High School at age 16.

She stayed with sister Nellie (Burton) King in Friday Harbor until going to Seattle with a friend for classes in business school. In the early years of her marriage to Cleave Vandersluys, they lived on their little fishing boat “Balls of Fire” and on shore at Henry Island. Meanwhile, it was war time. Cleave joined the Coast Guard and Renie became a lookout for enemy boats and planes.

Once children were off to school, she went to work at San Juan County Bank where she eventually became Assistant Vice President and Cashier. After many years in local banking, she retired to golfing and her passion of gardening.

She is preceded in death by husband Cleave and daughter Jeanie; her parents: William and Edna Taylor, brothers: Rufus and Wilfred Taylor and sisters: Nellie (Burton) King and Edna (Art) Reddick.