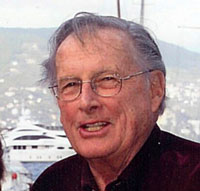 Robert Salem Crowder passed away at his home in Tiburon early Saturday morning on September 21, 2019. Bob, the week before, had celebrated his 95th birthday with his closest friends and family, including his great grandchildren. He was born in San Francisco September 11, 1924. His mother was Marie Bruce Crowder. His father was Otto Salem Crowder. He attended Lowell High School with his future wife, Jacqueline Kenfield.

Bob entered the army in April 1943. He was with the 96th infantry “Dead Eyes” 381st Regiment 2nd Battalion, heavy weapons company ‘H’, first platoon, heavy machine guns. The division later received a Presidential Citation for its performance in the battle of Okinawa. He also fought in the battle of Leyte Gulf. Having survived the war, Bob often shared the feeling of sailing under the Golden Gate Bridge and seeing his father and future wife, Jackie waiting for him at the dock at Fort Mason.

Bob married Jackie on June 15, 1946 in San Francisco eventually moving to Walnut Creek to raise their four kids. Bob received a BS in Chemistry from USF and a second BS in Chemical Engineering from the University of California Berkeley. Upon graduation Bob began his career with Chevron Research in Richmond, CA. In 1957 he was transferred to Chevron’s Manhattan office and moved the family to Huntington, Long Island, New York starting a pattern of developing deep, lasting connections with lifelong friends. After 11 years, Bob and his family were transferred back to San Francisco and settled in Tiburon in the home he lived in for 52 years.

Bob retired in 1986 and developed his passions for boating, wood working, traveling and gardening. He and Jackie traveled throughout the world building long lasting friendships with fellow travelers. Bob attended six Olympics Games, two World Cups, and US Open and Wimbledon Tennis Championships. He owned and chartered a 50’ Gulf Star sail boat out of the Grenadines and transitioned to power boats buying a 42’ Grand Banks which he moored in Roche Harbor in the San Juan Islands. Bob eventually bought a home on the island and loved his time there with the locals. He was a member of the Corinthian Yacht Club where he moored a Sea Dory.

Donations in Bob’s name may be made to: National Immigration Law Center https://secure.nilc.org/np/clients/nilc/donation.jsp?campaign=106&

Please go to www.robertscrowder.com for more information on the life and times of Bob.