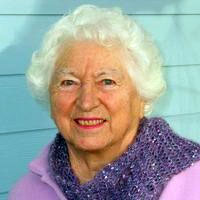 Elizabeth Barbara Jobbins was born in Norwich, England on May 6, 1931, and passed away due to complications of pulmonary fibrosis on December 6, 2019. Barbara emigrated from England to California with her parents at the age of six. She had a bucolic upbringing living on the family ranch in the hills of Santa Barbara where she rode her horse to school and enjoyed communing with nature.

Barbara attended Laguna Blanca School and Pomona College where she met her first husband, Richard Cary Hill. Barby and Dick had three children, Wendy, Cary and Debbie. While living in Pasadena, Barby was active in The League of Women Voters, the Episcopal Church, and restoring the house the family lived in. Upon moving back to Claremont, her beloved college town, she was known as “Tigger” with the local girl scouts where she organized many camping trips, fund raisers and service projects for the local troop and council.

Barbara moved with her family to northern California and was active with St Steven’s Church and was one of the founders of Hospice of Marin, the second hospice in the United States. Barbara enjoyed spending summers on Lopez Island, WA.

Barbara married Jerry Gonce in Marin County in 1982. Together they built a house on the Larkspur Boardwalk that was featured in Sunset Magazine. The house included a green house where her love of orchids bloomed from a hobby into a business.

Barbara and Jerry moved up the coast to the Sea Ranch and then Gualala. She enjoyed growing orchids commercially on the coast of California and selling them at Farmer’s Markets across the Bay Area.

Barbara and Jerry’s love for the San Juan Islands lead to retiring on Lopez Island where she became involved with quilting groups and was a motivating force for the creation of The Friends of Woodmen Hall.

Knitting and quilting were two threads woven through her life. Barbara knit many sweaters for friends and family over the years. Being a prolific quilter, her pinnacle accomplishment was when one of her quilts was placed on the program cover for The International Quilt Festival, Chicago 2019.

Barbara is survived by her husband, Jerry Gonce, his two children Jeff and Jan, a granddaughter and great-granddaughter, and her three children, Wendy Ward, Cary Hill, and Debbie Jones along with 9 grandchildren and 7 great grandchildren.